Every so often a publisher does something that completely surprises you. Here’s a case in point. Solaris do some great books. They publish Gareth L Powell’s Ack-Ack Macaque books, and Juliet E McKenna’s latest Einarinn series. But both of these are very clearly genre novels. I did not expect them to come up with something they might want to submit to mainstream literary prizes and not feel they were wasting their time.

More surprise: Signal to Noise is a novel from Silvia Moreno-Garcia, whom I previously knew from Innsmouth Free Press. It is not particularly a horror novel, and certainly not Lovecraftian. It has a lot more in common with Graham Joyce in the way it connects magic with a carefully observed family saga; and with Tim Powers in the way that modern-day magic works. There’s a bit of Liz Hand in there as well, mainly because of the love of music that suffuses the narrative.

Basically it is a love story about two misfit teenagers. And it is set in Mexico City.

Back in 1988 Meche (Mercedes) and Sebastian were two poor, geeky kids against the world. He loved books, she loved music. Their only ally was chubby Daniella with her love of romantic soap operas and belief in the power of home-made cupcakes as a cure for all ills. There ought, by rights, to be a burgeoning romance here, except that the logic of the classroom dictates that both kids should aspire to something better.

None of this would have been too much of a problem, broken teenage hearts aside, if Meche hadn’t discovered a talent for magic, and involved her two friends in her quest to use it to better themselves, and gain revenge on their enemies.

Magic, of course, is done with popular music. And because the book is set in Mexico City that music is a fascinating mixture of songs that I know and love, and whose power I understand, cut with work by artists I have never heard of, probably because they don’t sing in English. Now I want to look them up.

In some ways the book reminded me a lot of Nnedi Okorafor’s Lagoon. The fantastical elements are nowhere near as exuberant, but the sense of reading something written by a person with a deep understanding of the setting, as opposed to an Anglophone tourist, is very much the same. Here’s an example.

She grabbed her jacket and walked two blocks away, to a narrow Chinese café. She asked for tea, but this being a Mexican-Chinese café, there was none.

Mexican Chinese restaurants don’t serve tea? Really? Then again, goodness only knows what Moreno-Garcia would make of a Mexican restaurant in rural Finland. Cultures blend in all sorts of odd ways.

Getting back to the plot, the scenes from 1988 are cut with a parallel storyline from 2009. Meche is now a successful, well-paid software engineer. She lives in Oslo, having traveled widely before that. Now she is back in Mexico City because her father has just died. Inevitably this brings back memories of Sebastian, and of the acrimonious nature of her parents’ relationship during her teenage years. As the story progresses, we learn more about what happened back then, both to her and to her parents. And we learn that power, magical power especially, never comes without a price.

I have to admit that Meche is not the most likeable character. She has a lot of growing to do via her reunion with friends and family. If you are the sort of person who needs to identify with the central character of a book you won’t like this one. Stroppy or no, however, Meche does have a neat line in banter. Here she is telling Sebastian about her life in Norway.

If she had not told him, then she was sure her mother had.

“When you’re not coding?”

“Is that your boyfriend?”

“It’s a very big fern. I have several ferns but I only baptized one because if you name more than one inanimate object you’re heading into crazy cat lady territory.”

Signal to Noise is a beautiful book. Had I not seen Gary Wolfe and Jonathan Strahan enthusing about it, I might never have read it, let alone been expecting something good. Thanks as ever, guys. I loved it. Hopefully other people will too. 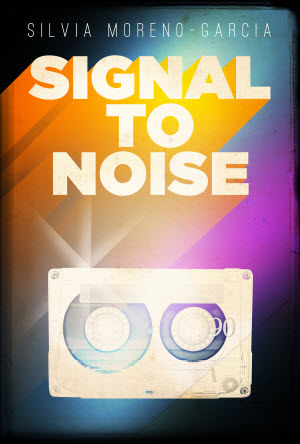