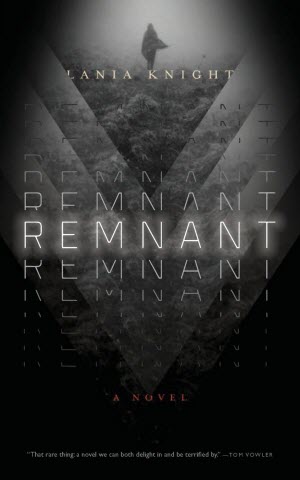 I met Lania Knight at a creative writing conference at Bath Spa University earlier this year. It turned out that we had a few interests in common, including feminist science fiction. Knight had a novel published in 2018 through an American small press. Life happening and the press in question not being a science fiction specialist have conspired to causing the book to fly under the radar, so I offered to take a look at it.

Remnant is a dystopia, which is pretty much par for the course for feminist SF, but it is unlike any I have read before. Yes, civilisation has collapsed, but a small part of it has survived thanks to a very wealthy scientific genius. She, now known only as Maitris, has created a small colony based around her biotech skills. Most of the inhabitants are clones of various types, each line created for specific purposes. Being the only technology that mankind has left, the clones are used for everything: managing the colony, doing the science, farming, security, food.

One clone line is special. Maitris has only one clone at a time. She is reared in seclusion (safe from assassins) on a small farm far from the city. The clone will know nothing of her world, save that she is destined one day to become its Queen. To the rest of the colony she is known as the Remnant.

Our story, fairly obviously, follows the current Remnant at the point at which she is brought to the city to become its ruler. But not everything is as she has been promised, including her role in it. Most importantly, entropy has set in. Vital chemicals are running low. Computers are getting old and becoming impossible to repair. The few crops that have survived have insufficient disease resistance. Issues with some of the clones cause them to go mad after a few years. (Oh well, they can always be eaten, but they are disruptive.)

We are looking, then, at a dying world. Some of the clones have enough sense and self-will to understand what is going on, and to plan for life after the colony. But can they trust each other? Is there really a safe world across the Border of the colony as some enterprising goat herds have claimed? And most importantly, will they be able to make new humans without cloning?

Guess who is the only female person in the colony known to be fertile?

It is a great set-up. I can also see how it might have been executed somewhat better. One of the issues with this sort of political fiction is that there’s a tendency for the characters and plot to fulfil a role. If Remnant had been written in the 1970s I’m sure we would all be saying how great it was. These days we find ourselves asking what an Anne Leckie or NK Jemisin might have done with the story.

Of course not everyone is going to produce Hugo-winning fiction to order. And Knight can write. Her debut novel, Three Cubic Feet, was a finalist in the Lammys a few years back (it is a gay YA book). My reservations about Remnant are that the book concentrates a little too much on the world and what must happen to it; and doesn’t give the rather interesting characters enough room to breathe. However, if you like feminist SF, you should definitely give this book a try. There’s a conversation out there, and Remnant deserves a place in it.