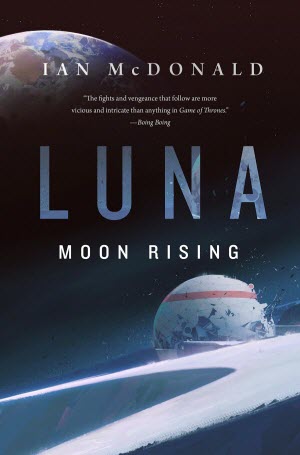 Reviewing the final book in a series is always a challenging task as you want to talk about how the author has concluded the story arcs, and yet somehow avoid giving too many spoilers for the previous books. I’m not going to try very hard here, because there are few excuses for not reading Ian McDonald. You should be up to date.

The Luna series has a very simple elevator pitch: it is Dallas on the Moon. In a relatively near future the Moon is busily being commercially exploited by five major families known as the Dragons. There are the Mackenzies from Australia who prospect for metals; the Vorontsovs from Russia who handle space transport; the Asamoahs from Ghana who handle life support and food for the colonists; the Suns from China who, appropriately, are into high tech including solar energy; and the Cortas from Brazil who mine helium. There is much corporate intrigue, and much family drama.

The Cortas, by the way, are the stars of the series. A while back now McDonald wrote a series of books set in non-Western cultures: India, Brazil and Turkey. Brazil is the culture that he seems to have fallen in love with. I can see why, even if they haven’t yet learned to play cricket.

While this is all perfect television fodder, and the series was optioned before the release of the first book by CBS, there is also much interest in sociology and politics. To start with the Moon is an entirely commercial society. Everything is regulated by contracts, and anyone can agree a contract of any kind. I’m sure this is in part a comment on some of Heinlein’s more Libertarian writings, though I want to read more of Farah Mendlesohn’s excellent book before commenting further on that. The important point here is that it gives an excuse for courtroom drama, which is why the brilliant, if self-centred, lawyer, Ariel Corta, is one of the stars of the series.

Luna society is innovative in other ways too. The people of the Moon don’t feel bound by existing Earthly customs and mores. They live how they want:

Alexia sees a dumpy, brown-skinned figure, short silver hair, robed and scarved in exquisite, fine-textured weaves that give nothing to fashion. Woman? Man? Alexia can’t tell. She doesn’t need to be able to tell; this is the moon. There seem to be as many genders and sexes and sexualities as there are citizens. And there are pronouns – or not, depending on personal taste – not just for those genders and sexes and sexualities, but also for non-human entities, and alternative human personalities. The Farsiders have a pronoun for speaking to and of machines. And then there are the Moon Wolves and their darkside and lightside aspects.

It is very much the beginning of a post-human future; the sort of thing that terrified conservatives on Twitter believe that trans people are attempting to foist upon them. (Which of course some of us might be.)

This, then, is the science-fictional side of the series, the speculation of how human society might develop. But in many ways it takes a back seat to the human dramas of family and politics. At the start of the first book the Five Dragons are ruled over by ageing patriarchs, and one matriarch, who have grown to hate each other. There have been attempts to weld lunar society together through cross-dynastic marriages, but these seem to end up either by seducing the incoming partner to the side of the family they are joining, in early divorce, or by becoming hostage-taking. Mostly their battles are fought through commerce and law, but violence is never far away. By the end of book two, everything has fallen apart.

The purpose of Luna: Moon Rising, inevitably, is to allow a new lunar society to grow from the ashes of the old. This has to allow the younger generation to put aside the enmities of the past and unite to face a greater, and fairly obvious, foe. Bad guys have to get their comeuppances, and there need to be a few happy endings. McDonald accomplishes all of this with expert ease. Much of it is, of course, entirely predictable, but by this time you are sufficiently invested in the characters to only want the outcomes that you can see. And even predictable outcomes are not won easily.

I’m very much looking forward to seeing this series on TV. It isn’t going to be another Expanse. McDonald is a good enough SF writer to make things seem mostly sensible, but that isn’t the point. The point is the people: their loves and rivalries; their obsession with fashion; and the jaw-dropping architectural vistas that they create thanks to the blessing of living in one sixth G. It will be visually stunning, it will be merrily multi-cultural, and no dudebro is going to be able to say that all those brown and queer folks shouldn’t be there because it isn’t “historically accurate”.