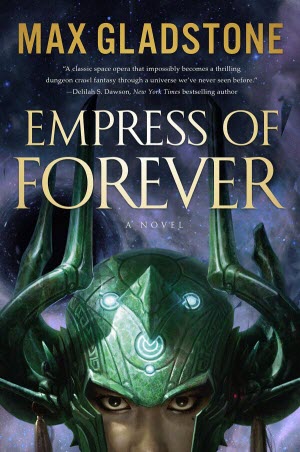 One of the things that is fashionable in the publishing industry these days is to have an “elevator pitch” for your book. This is just a couple of lines describing your idea that you can pitch in a matter of seconds, perhaps where a decision maker is in an elevator with you and can’t escape.

For Max Gladstone’s Empress of Forever the elevator pitch might have been: Flash Gordon, but Emperor Ming is a woman and Flash is a lesbian tech entrepreneur.

That, of course, is only the first layer. The book does feel very much like a Flash Gordon story at times, but there’s a lot more too it than that. I won’t dive into the depths as that would be spoilery, but here’s a few examples of the entertainment on offer.

Our hero is Vivian Liao, self-confident to a fault but utterly out of her depth having been stolen away from Earth and dropped in the middle of a galaxy-spanning conflict. All she has to rely upon is iron determination and a lifetime’s experience in people management.

Fortunately she has Hong, a warrior monk of the Mirrorfaith. Hong’s people worship the Empress, but he is a heretic, seeing in Vivian an opportunity to bring about change.

There is also Xiara, princess of a warrior clan on a backwards planet where the locals just happen to have been genetically engineered to be brilliant space pilots.

Most of all, however, there is Zanj, the Pirate Queen. Zanj is probably the only person in the galaxy that the Empress fears. She had led a revolt that was very nearly successful, but instead ended up imprisoned in a star, until Viv came along and freed her. Furred and tailed, with claws as sharp as her intellect, Zanj is the ally everyone needs, if only it were possible to trust her further than you could throw her. And let’s face it, anyone who tries to throw Zanj anywhere is likely to end up dead in very short order.

Zanj had her tricks, but Viv would never accuse her of subtlety. If she needed to hide in the shadows, she’d just snuff out the sun.

These, then, are some of the rag-tag group of misfits ranged against the Jade Empress, a woman so powerful she dreams of bending all of reality to her whim. Not to mention against the Pride, the spiky-death-metal robot race who are the mortal enemies of the Mirrorfaith. This is superhero-style space opera with a vengeance.

As befits the format, the book is shot through with pop culture references. One of my favorites is when Viv gets her eyes on the Mirrorfaith’s secret arsenal of super weapons:

Viv stepped through into an immense space, dimly lit by pulsing dots on the walls, no brighter than city stars. The Archivist followed her, and Qollak, and the door swung shut behind them with a thud. Viv’s night vision chiselled shapes out of the darkness: catwalks, shelves flanked by those stardots, and on the shelves all manner of boxes, baubles, weapons, machines, guns and crowns and shields and armor and, for some reason, a simple, blocky hammer.

This book is a heap of fun. It is also, as I noted earlier, much more complex than it seems at first sight. It is also decidedly queer, and a heartfelt plea for opposing factions to work together in the face of a seemingly all-powerful enemy.

Empress of Forever is about as far away from hard science fiction as it is possible to get and still be set in a far-future, technologically advanced civilisation. It is hugely entertaining. And yet in its own way it is a very serious book.

Of course, all of those people who have been clamouring for a return to fun science fiction adventures will hate it.