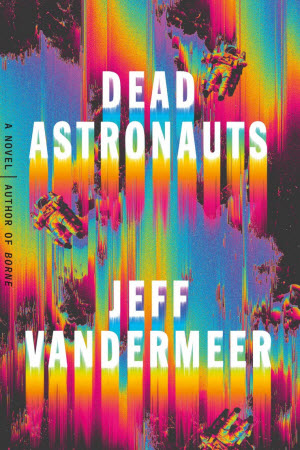 The new book from Jeff VanderMeer is set in the same universe as his novel, Borne.

I used two words very carefully there: “book” and “universe”.

In Borne one of the main characters, Rachel, discovers a courtyard in the city where three bodies are half-buried in the dirt. They look like astronauts as they are wearing all-encompassing white suits. Inside the suits are only skeletons.

Rachel soon realises that they are in fact wearing biohazard suits, which is entirely understandable given that the city in which Borne is set is overrun by escaped, experimental biotech. Borne himself is the most obvious example of that. But the label, “Dead Astronauts” stuck. VanderMeer talks about why in this interview from Weird Fiction Review (which is also where I found the magnificent art by Kayla Harren that I have included here).

It just came to me in a flash and then I had to decide if they were really astronauts and what people thinking they were astronauts meant in terms of the story — in a sense, people in the City thinking they’re astronauts is a kind of hope about the future or perhaps about the past. But I knew it was a potent image and had some symbolism and so I felt it deserved to enter the story further.

The book, Dead Astronauts, is the result of that exploration. Borne’s world, as I noted, is one of biotech run amok. In the past the city was run by The Company, a monopolistic organisation that employed and used pretty much everyone. But The Company died some time ago. All that is left are its labs, a few biotech geniuses, and the more successful of its creations. The Astronauts, in their role of symbols of hope, have taken it upon themselves to fight against The Company and put the world to rights. 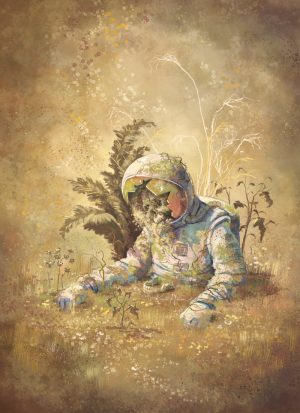 They are not astronauts, of course. Except that one of them is. Grayson, a black woman, is the sole survivor of a doomed Moon colony who returned to Earth after all her colleagues had died. Grayson is also the only one of the Astronauts who is fully human.

Chen, though he was made to be human, is a thing created by The Company. He is perhaps a clone. Maybe there was once a human ur-Chen. But now there is perhaps what Victor Frankenstein would have created had he been able to make copies of Igor at will.

Moss is not human, and never has been. Moss is, well, moss. But Moss is able to take on bodily forms. For convenience that form is human. In this story that human is female, though we are told that has not always been the case. Moss is who Moss wants to be at the time.

Remember my opening remark with its carefully chosen words? I said that Dead Astronauts takes place in the same universe as Borne. Which means that somewhere in the city there is a courtyard where three dead astronauts are half-buried in the soil.

OK, so that’s a bit of a spoiler, but it is in the title of the book. The Astronauts are dead. They lost.

We find this out for certain about half way through the book, and from then on things get very weird. Which is why I described Dead Astronauts as a book rather than a novel. Obviously it is a novel — it says so on the cover — but it is a novel quite unlike anything that you, dear reader, might be used to. This is VanderMeer at his most experimental. Think back to City of Saints and Madmen, with its collection of short fiction and bizarre appendices. Some of the remaining sections of the book are more poetry than prose. Indeed, this is one of the few books where I really want to listen to the audiobook, to feel the text wash over me. Simply reading it seems somehow inadequate.

Much of the second half of the book is told from the point of view of the non-human inhabitants of the world. These tend to be company creations because they have sufficient cognitive ability to tell their stories, but they have not lost contact with their animal natures, nor with their less manufactured relatives.

The rest of the world is pretty angry with the humans. They have good cause.

I was a little confused for a while after finishing the book. What the heck was the point of all that, brilliantly evocative though it was? Thankfully this review by Alison Sperling in the LA Review of Books reminded me that science fiction is not about the future, it is about the Now.

We are living in a time of runaway climate change. If nothing changes, we may lose between 30% and 50% of all animal species to extinction by 2050. Some of us are still trying to fight The Company, but it is quite possible that we have already lost. Dead Astronauts is a book that faces that possibility head on and asks, “What the fuck were you thinking?”

There is no sane answer to that.