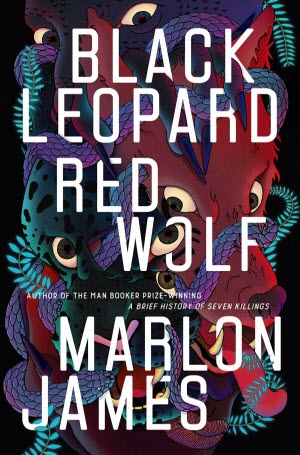 “Truth eats lies just as the crocodile eats the moon”

Thus speaks Tracker, the Red Wolf, the principal viewpoint character and narrator of Marlon James’ new novel. He is in prison at the time, being interrogated by someone he refers to as an inquisitor. If that doesn’t ring alarm bells as to the accuracy of his narration, his behaviour during the book surely will. There is a lot of moon to be eaten.

Much has been written about how Black Leopard, Red Wolf will be an “African Game of Thrones”. It is true that it is a massive, sprawling, blood-drenched epic, but beyond that the comparison is by no means obvious. Martin’s series is a tale of the scions of great noble families vying for control of a kingdom. In James’ books the politics are still there, but the protagonists are for the most part less exalted figures.

Tracker himself is a country boy from a minor tribe. True he is twice-blessed: once with a nose of uncanny acuity, and once with a protective spell from a friendly witch. But in the political arena he is a nobody. The Leopard, well, he’s a leopard. He is not The Black Panther, King of Wakanda. He may be the King of the Jungle, for everyone knows that the lion can barely climb a tree, let alone get enough food to eat without his wives to go hunting for him, but the Leopard is still a cat. Occasionally he is a man, which makes speaking easier, but words are over-rated.

Once you see past the pyrotechnic prose, and the wonderfully unfamiliar African mythscapes, the rest of the central cast comes across like a Dungeons & Dragons party. In addition to Tracker and his shape-shifting friend, we have Sogolon the Moon Witch, Fumeli the archer, Sadogo the sorrowful giant, Mossi the swordsman, a very smart buffalo, and a few others who pop in and out of the narrative.

This is not a Fellowship, though James makes cheeky use of the word occasionally, because they mostly hate each other for various reasons. Sogolon is particularly caustic:

“Fellowship tear apart before it even come together in the valley. Three of you go off in the Darklands and one have to follow because you is man and man never listen.”

Our heroes, then, are on a quest because someone, not necessarily their immediate paymaster, has hired their services.

Oh, and yes, the characters do not speak Home Counties English. Why should they?

There is, then, a fairly standard fantasy narrative at the core of the book. There are people with power. They have plans. They need things done, and they hire a bunch of talented mercenaries to do the work. But there is so much more.

I was rather hoping for a grand historical narrative based firmly in actual African history. There are so many great options to choose from: Kush, Ghana, Songhai, Zimbabwe, Kongo, Benin and so on. James has chosen not to do this. Instead he has created an almost hallucinatory landscape that does have mighty cities, but is also populated with mythical creatures and borders on worlds clearly not our own.

We meet Asanbosam and Sasabonsam from Ashanti legends, and Ipundulu the Lightning Bird who is known to the Zulu and Xhosa. All of them are vampires of a sort, whereas the Omoluzu lurk upside down walking on roofs ready to snatch the unwary. We meet Chipfalambula the Living Island. We travel to the Darklands where time seems to run differently, and to the mighty tree city of Dolingo.

Nevertheless the story is clearly set in Africa. There is talk of the great Sand Sea. Mossi hails from the East where foolish, pale-skinned men think there is only one god. When I worked out what James meant by “glyphs” I kicked myself. As in Black Panther, it is an Africa made up of many traditions. Some of the creatures listed above are well known from myth. Some James appears to have altered to fit his needs, and some he may have made up. Words are taken from a variety of African languages. Customs are used too. Two of them will doubtless be contentious to some readers: slavery and homosexuality.

James is not shy about portraying slavery as existing. It was, after all, commonplace in Roman times, so why should it not be here? His story is set in a fantasy version of iron age Africa. The man who hires our heroes is a slaver. He is not a good man, but he is far from the worst we meet. This being a fantasy world it could, of course, have been made a world in which slavery did not exist. James did not make that choice. It isn’t my place to judge him, but I suspect that others will.

As to sex, Tracker is unashamedly Shoga, an effeminate man who prefers sex with other men. Or male cats who can become men. He is by no means the only man in the story to have such preferences. Indeed, his relationships with other men in the band are a major influence on the plot. While his behaviour is looked down upon by many, it is not unusual. Men fuck each other, a lot. This too has plenty of basis in reality, though there are those who will seek to deny it.

In addition to Shoga, which is a Swahili word, James mentions Mugawe, a tradition of men living as women found among the Bantu people of the Meru region of Kenya. He also mentions warriors called Uzundu who, like some Greeks, fought alongside their lovers. I can’t find a source for that, but then in an interview with Tochi Onyebuchi in Electric Literature he mentions that some African tribes have 15 genders. That fair blew my head off, and I can’t wait to find out more.

A final thing that will cause upset is that James loves poking fun at fantasy clichés. The most obvious example of this is that in so many fantasy books the wicked people practice something called “black magic”. James is having nothing of this. In his world the wickedest people are practitioners of something called “white science”. And why shouldn’t they be? It’s not like they have to base everything in their civilisation on Graeco-Roman ideas of purity. Fuck the physiognomists, there’s no reason why whiteness can’t be an indicator of evil. There will be tears before bedtime in Puppydom over this. I shall be much amused.

Of course the true indicator of evil is not blackness or whiteness, but hyenaness. Any leopard will tell you this.

I should note that while many of the possible parallels to Game of Thrones are missing, Black Leopard, Red Wolf can claim to be Grimdark (or should that be Grimpale?). Lots of people die, some of our heroes included. Some people die horribly. Tracker kills quite a lot of people. Pretty much everyone involved in politics is an awful person in some way, no matter how noble their cause might initially seem. The strangest of alliances may be struck out of necessity. Tracker begins the story in prison. We know there are no happy endings, in this volume at least.

Of course there will be more books. Black Leopard, Red Wolf is billed as the first book of the Dark Star Trilogy. But it is not a trilogy as we know it, Captain. According to a Guardian interview, the other two books will tell the same story from different viewpoints. That’s not entirely new. For example, Anne McCaffrey did something like it with some of her Pern stories. But in her case everyone was telling the same tale. That, James has made clear, will not apply to his books. All of his narrators will lie.

The crocodile who eats the moon is a myth. Perhaps what Tracker meant is that Truth is a myth too.

The next book will be told by Sogolon. You can be sure that she will have a thing or two to say about Tracker, and about men in general. I’m looking forward to it.