All of Emma Newman’s previous books in the Planetfall series have been billed as being readable as stand-alones. The new book, Atlas Alone, may be the first to break that pattern. It is a direct sequel to After Atlas. If you are going to read it, it would be helpful to know who Carlos, Deanna and Travis are, and why they are on a starship heading after the Pathfinder. I’m going to assume that you folks know that. If you don’t, there will be spoilers.

So our heroes are safely aboard the Atlas II. Earth is a smoking ruin behind them. Most of the passengers are unaware of what happened after they left, but we know. We also know that some of the people in charge of the ship think that they have been part of the Rapture. Those sorts of people are unlikely to look kindly upon passengers who are not part of their cult. That includes our three escapees.

This book focuses on Dee. As regular Emma Newman readers will know, each of her books in the Planetfall series has a theme of mental illness. For Dee that means her unprocessed trauma from surviving London after social collapse when she was a child. It has made her self-reliant, ruthless and unable to trust others. Those characteristics happen to make her very good at immersive games – the book world technological version of LARPing, a hobby Emma is a very fond of. So when Dee is given an opportunity to play a game on an elite server available only to the upper echelons of Atlas II’s crew, she jumps at it.

As it turns out, our heroes are not the only people on Atlas II who know what happened to Earth. There is someone else as well, and he’s angry. He wants the guilty to be punished; and he wants Dee to help him. She’s unsure, but during the game she kills a non-player character, and when she emerges she discovers that a senior member of the crew has died. Somehow Dee’s mysterious contact has got her to kill on his behalf.

Pretty much all of this is in the back cover blurb, by the way.

From now on Dee is trapped. An investigation is launched. Carlos, having been a top detective back on Earth, is put in charge. Dee knows that she could be convicted of murder, but she also knows that her victim is one of the people responsible for the destruction of the Earth. Meanwhile her mysterious helper is busy trying to manipulate her into continuing to help him. He knows an awful lot about her; and is a master of psychological manipulation. Can Dee find out who he is, or help him kill the rest of the command crew, before Carlos catches her? And which should she do?

The book, then, is a psychological thriller with a badly traumatised woman as the viewpoint character. We live inside Dee’s head for the whole book; and get to feel her pain as she is ruthlessly manipulated. This is not a comfortable read, but it is a compelling one.

In happier times I would complain that the politics of Atlas Alone are simplistic and rather offensive to Americans. These days, however, we are facing what appears to be a hard-right Christian evangelist coup in the USA. I don’t suppose Emma will be the only person writing about this sort of thing. I still have reservations about the worldbuilding. I don’t believe that Europe would have been able to easily absorb the enormous number of American refugees who would want to flee the imposition of a theocratic government. But that’s not the point of the book. What we are interested in is the mental struggle that Dee is going through.

More than that I cannot say, because I absolutely do not want to spoil the ending of the book. I will be fascinated to see how other readers react to it. I also want the next book, NOW!

Yeah, it is gut-wrenching. I kind of trust Emma to do that these days. She’s very good.

But also the series has become very firmly plot-driven. The crew and passengers of the Atlas II have a number of serious issues to face. And at some point they will arrive at the colony established by the original Atlas mission. Aside from a handful of colonists stranded on Mars, these two groups are presumably the only humans left alive in the universe, so Emma doesn’t have much choice as to who and what to write about. Knowing Em, I’m sure she has it all plotted out, but it is going to be a challenge to pull off a satisfying ending. 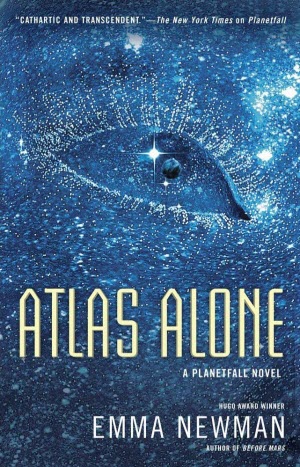