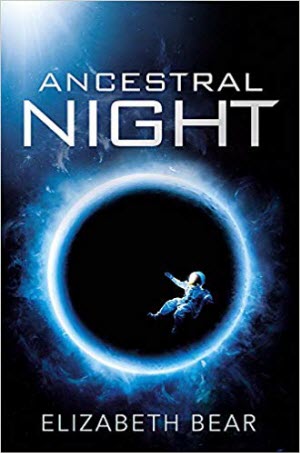 Hmm, what have we here. Let’s see…

Yep, this is space opera alright.

Elizabeth Bear has form, of course. Her Jacob’s Ladder series ranks as one of my favorite science fiction trilogies. I was expecting good things of Ancestral Night. I was not disappointed.

Our hero is Haimey Dz — I’m guessing Jamie Diaz with a bit of linguistic shift. She’s an engineer by trade. She and her colleagues run a salvage business, finding old, lost starships and bringing them in for recycling. Said colleagues are Connla, her pilot; Singer, her ship’s AI; and two cats, Bushyasta & Mephistopheles.

Salvage is the sort of business where you limp along from one job to the next, barely making enough to re-equip for the next voyage. You do it because it gets you away from the mass of humanity, and because you hope that one day you will get lucky and find something really valuable.

I can’t tell you much more than that without spoilers, but I do want to note that there are pirates. Because if you do find something valuable you can bet someone will want to take it off you. (That’s not a spoiler, you knew that was going to happen.) Pirates, in Bear’s future world, are brave and dashing and sexy. They are also Libertarian arseholes who have no responsibility to anyone other than themselves. They go by that famous maxim, “I should be free to do whatever I want, and I’ll kill anyone who tries to stop me.”

At one point during the book this leads to a long political debate between Haimey and the pirate leader about personal responsibility and freedom. It is all very Heinlein. Unfortunately for Haimey, she has a past. Because she accepted mental re-programming as part of a plea bargain, she can’t remember it. But that doesn’t mean that no one else knows what happened.

The book delivers pretty much what you would expect. Lots of mysterious alien stuff; political debate (including skewering certain people who I am very pleased to see skewered); high-stakes adventure; and cats. There will be some readers who find it overly sentimental, but there’s no reason why all of the characters in a book have to be horrible people. Some people will also go, “ewww, lesbians!” There’s no accounting for some people. Most folks, I suspect, will thoroughly enjoy it. I know I did.

It is worth noting that, while there is no reason why Bear should not write more adventures of Haimey in other books, this one works perfectly well on its own. Things are wrapped up nicely at the end. I say this because some sites are listing the book as “White Space #1” (White Space being Bear’s name for hyperspace), and some of you may be put off because you think the book will end on a cliffhanger. I should note also that the book is set in the same universe as the Jacob’s Ladder books, though presumably well after the events of that series.

There are also some very interesting bits of alien technology. This being space opera rather than hard science fiction, Bear does not have to explain exactly how they work. A fair amount of handwavium is involved. But there’s enough actual science there to make it all sound roughly believable. I particularly liked the idea that ships emerging from hyperspace have a bow wave of high energy particles that will destroy anything in their path. Which is either very useful or deeply embarrassing depending on who happens to be in your way.

Overall, a definite paws up on this one. It doesn’t do anything startlingly original, but it knows exactly what it is doing and it does it very well.