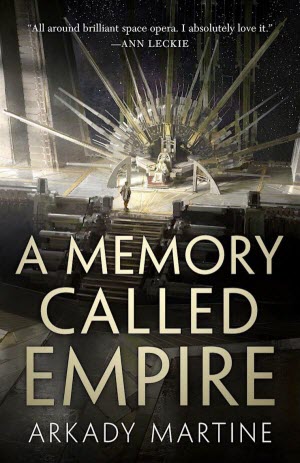 We seem to be particularly blessed with debut novels this year (2019). I was hugely impressed with The Ruin of Kings in epic fantasy. Now it is the turn of space opera and A Memory Called Empire by Arkady Martine.

Let’s start with the worldbuilding. Everyone has some idea of what an interstellar empire looks like, so creating one that will stand out takes a bit of doing. Martine’s academic expertise is in the Byzantine Empire, so she certainly knows how empires work. Teixcalaan, however, feels more Chinese to me. They have ideogrammatic writing, put great store by civil service exams, and have a cultural addiction to poetry. All of this makes life a little challenging for our heroine.

Mahit Dzmare is the new ambassador to Teixcalaan from a small, independent space station called Lsel. She has been summoned to Teixcalaan in a hurry, and on arriving she soon finds out that her predecessor has been murdered, though his death has been officially recorded as accidental. Apparently he got himself involved in palace intrigue. This is not a good start, and Mahit has a lot of catching up to do. Although she has been a keen student of Teixcalaani culture, living it is a very different matter from reading about it. There are translation issues to navigate. And of course the whole experience of living on a planet is new and strange to her.

One of the more quirky aspects of Teixcalaani culture is their naming system. Everyone’s name is a number followed by an object of some sort. Mahit’s liaison is called Two Seagrass, which may not mean anything much. However, the Emperor is called Six Direction, for the very obvious reason that his power extends in all six directions of 3D space. There’s a general called One Lightning who fancies himself a fascist dictator. Names can clearly be important.

The idea of a vast empire with an aging ruler is hardly new. We find it everywhere from Star Wars to Ancillary Justice. Martine therefore has to find a new angle, and she does a decent job. Without giving too much away, there is a potential succession issue. An empire with a succession crisis is a dangerous thing. There tends to be a lot of sabre-rattling. The daily news fills up with planted stories praising or denigrating powerful people. There is talk of war, for war is always good for taking people’s minds off domestic politics. Perhaps the empire should annex a few more regions of space, such as that one containing a few, largely defenceless, independent space stations.

All of this would be hard enough for Mahit, but she has trouble at home to deal with as well. The Ruling Council of Lsel does not appear to be entirely united at this dangerous time. Indeed, it looks like someone has sabotaged her mission before it even began.

How and why Mahit has been compromised is something I will have to leave you to find out. It revolves around another interesting science fiction trope that Martine has latched onto and made her own. It will get introduced fairly early on in the book, but the full import of what is going on may not become clear until much later.

There are no great space battles in this book, at least not in view of the characters. However, great space opera in books doesn’t need that spectacular vista to succeed. What it needs is a grand scale of events, a convoluted plot, and some fascinating characters. Martine delivers on all three.

If I have a reservation about the book it is that it seems to wrap up too neatly at the end. Martine makes it seem like that’s the end, that the book is a stand-alone. Which would be a shame because the threat of massive interstellar war that the book introduces has not gone away. Thankfully the publishers are not as coy. They insist that the book is the first volume of a trilogy. Huzzah! Bring on book 2!