The Ten Thousand Doors of January Alix E Harrow is not a necromancer from the Ninth House, though she may sound like it from her name. Nor does she appear to have a thing about bones. She does, however, appear to have a thing about doors. This year she won the Short Story Hugo for something called, “A Witch’s Guide to Escape: A Practical Compendium of Portal Fantasies”. Her debut novel is called The Ten Thousand Doors of January.

If I tell you that the January in question is a young girl who acquires the ability to travel through magical portals to other worlds you might think there is something of Seanan McGuire’s Every Heart a Doorway going on here. But this is not that book.

You might think, when Miss Jane Irimu sweeps into January’s life like some Bantu Mary Poppins to save her from the grim governess, Miss Wilda, that you were in a different book entirely. Mary did, after all, have the ability to conjure magical portals to other worlds. But this is not that book.

The Ten Thousand Doors of January is, as the back cover blurbs suggest, a love story. It is a story of people whose love endures even though they are literally worlds apart. But it is much more than that.

If you want your book to appeal to a literary audience, one of the best ways to win them over is to make your book about stories. Ideally it should contain nested stories, after the fashion of Scheherazade, or Cat Valente’s The Orphan’s Tales. For a long time The Ten Thousand Doors of January seems like it might be that book. There is certainly a book within in a book.

We are first introduced to Miss January Scaller whose father is an archaeologist, forever off on expeditions on behalf of his employer, Cornelius Locke. As her mother is dead, January lives as a ward of Mr Locke in his rambling Vemont mansion around the start of the 20th Century. He tries hard to make a proper young lady of her, but he is working with entirely the wrong materials.

January, meanwhile, has come into possession of a book called The Ten Thousand Doors, produced by an academic in the city of Nin in the year 6908. Nin is not in our world, so it is no surprise that their calendar is different. That book tells the story of a young farm girl from Kentucky who finds a door to another world. (She is not from Kansas, and she does not travel there on a whirlwind; this is not that book.)

It is not clear to begin with what these stories have to do with each other. But then, on page 164 to be exact, or much earlier if you spotted the clue that Harrow leaves lying in plain sight, everything falls into place. Yes, this is a love story. But it is also a story about Doors.

If we address stories as archaeological sites, and dust through their layers with meticulous care, we find at some level there is always a doorway. A dividing point between here and there, us and them, mundane and magical. It is at the moments when the doors open, when things flow between the worlds, that stories happen.

It is no accident that a story about Doors contains a character called Mr Locke. Nor is the prestigious New England Archaeological Society quite what it claims.

Like all good books, this one is not just concerned with its own story, but also with the Now. January’s father is black and so, inevitably, despite taking strongly after her mother, is she. Both of them get to experience the least pleasant side of the USA. The scholar, being from another world, is well placed to observe:

One of the most difficult elements of this world is the way its social rules are simultaneously rigid and arbitrary. It is impermissible to engage in physical love before binding legal marriage, unless one is a young man of means. Men most be bold and assertive, but only if they are light skinned. Any persons may fall in love regardless of station, but only if one is a woman and the other a man.

January, at one point, is committed to an asylum, which is exactly the sort of “cure” that was recommended for wilful young women in that time. She takes stock of her fellow inmates at bath time:

I shivered beside the fish-pale nakedness of two dozen other women, all of us made ugly and unsecret, like snails pulled from their shells. I watched them furtively—twitching or weeping or silent as tombstones—and wanted to scream: I’m not like them. I’m not mad, I don’t belong here. And then I thought: Maybe they didn’t belong here, either, at first.

And finally, January’s father is under no illusions that his work for Mr Locke is scientific:

…my papers at the border identify my occupation as an exploratory archaeological researcher, but they might more accurately say well-dressed grave robber. I once overheard the Uyghurs of China refer to me by a long and complicated name filled with fricatives and unpronounceable combinations of consonants—it means the story-eater.

I am reminded of the Pitt-Rivers Museum in Oxford. So many Things.

There is a point to all this. Doors are agents of change. Who knows what might come through them? Mr Locke and his colleagues, as agents of the Kyriarchy, wish all Doors to be closed. It may be that in a world like ours, wishing for Doors (Borders?) to be open might be seen as mere escapism. But there can be no revolution without hope of escape. In any case, love is an agent of chaos. Cupid strikes where he will. And when he does, no mere Door can keep the lovers apart.

The Ten Thousand Doors of January is a book about Doors, but every book needs an antagonist. In this case the enemy is Walls.

Cue Pink Floyd and Gerard Scarfe, repurposed for the age of Trump and Bozo. 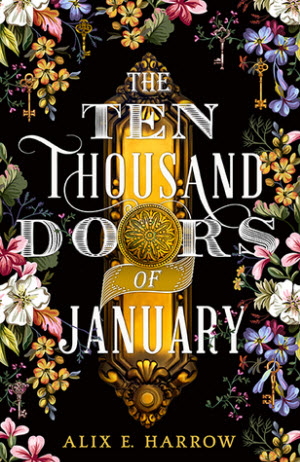