“It was always going to come down to humans versus aliens,” says Femi. “That’s all it ever was.”

Fair enough. Femi Alaagomeji is my favourite character from the Rosewater series, and she generally talks sense. I’d expected this ever since reading The Rosewater Insurrection. Look, Rosewater is a story of alien invasion set in Nigeria. How can it not be a story about colonisation? So while Wormwood and the Homians have brought all sorts of interesting technology to Nigeria, and Jack Jacques is trying hard to build a new world were aliens and humans can live side-by-side, we can’t escape the weight of history.

I hate to bring the British into this, but it’s unavoidable. To understand the future we need to understand the past, not just as context, but as the seeds of catastrophe.

That was Oyin Da, otherwise known as The Bicycle Girl. Now as far as I can make out John and Richard Lander did not discover a book of prophecies far more accurate than Nostradamus in the wilds of Nigeria. Not did they fall into the hands of Viscount Goderich, the man whose record for the shortest tenure of a Prime Minister who did not die in office Boris Johnson will hopefully soon eclipse. But the influence of British colonialism on Nigeria runs deep and we really can’t expect Nigerian writers to let us off by writing fluffy technofuturism when they could be writing about us instead.

Colonisation is not just a matter of geography. We didn’t just take their land. We crushed their culture and tried to supplant it with our own. So year, a bunch of aliens from a far off and with massively advanced technology who want to implant their minds into the zombie bodies of the dead locals is totally an appropriate metaphor.

That said, there is still a lot of other stuff in Rosewater Redemption for readers, even British readers, to enjoy comfortably. We have, after all, had two books full of these characters already. War is coming to Rosewater once again. We’d like to see what happens to them. Plus there’s the question of how the heck you manage to fight the Homians when their technology is so massively superior to anything humans might have.

Having read David Mogo, Godhunter, I now understand Taiwo and Kehinde, the crime bosses of Rosewater, much better, and therefore not at all. Are they actually orisha, or just human avatars? Is there presence in this obviously science-fictional work turning into fantasy of some sort? Who cares, white girl? Yours is not to understand, yours is just to read and enjoy.

Personally I have never quite understood the relationship between Jack and Hannah Jacques. Then again, I have never understood the relationship between Bill and Hilary Clinton either. Politicians are a breed apart, and Tade Thompson has had rather more contact with such people at a high level than I have, so I’ll defer to his judgement on this one.

I’m pleased to see that Lora Asiko is back in this novel, and I also very much like the new boy in town, Blessing Boderin. Boderin is Jack Jacques’s lawyer, and the disagreement that he and Lora have over Hannah’s court case on whether reanimates are alive is one of the most fascinating aspects of the book. They are both right: Boderin from a legal point of view, and Lora from a political point of view. There’s a subtlety of understanding here that is often lacking from fiction.

Then there’s time travel. Yes, it is the theme of 2019. Can we change the future by changing the past? Should we even try to? Or can we just go back in time to find the information we need to win a war in the present? Oyin Da thinks that she can. That may be the key to defeating the Homians. The fact is that we can’t, but I so understand the temptation for people to want to write about it now.

Is this something of a scattergun review? Yes. Sorry about that, but trying to find things to say when some of you might not have read the first two books, and for everyone else the only question is who lives and who dies, is not that easy.

So let’s wrap it up here. Rosewater Redemption is a fitting end to a very fine trilogy. Tade Thompson has definitely arrived on the world stage. I’m very much looking forward to seeing what he does next. (As long as it isn’t more blood-spattered horror. You know that about me, don’t you Tade. Sorry mate.) 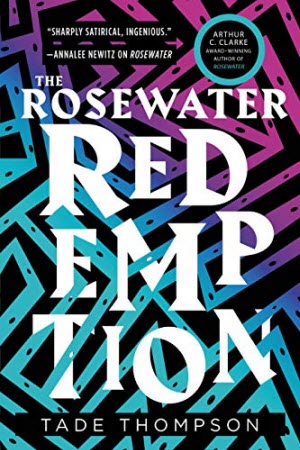