I need to start this review by saying that it will inevitably contain spoilers for Rosewater. It is pretty much impossible to talk about the new book without explaining what Rosewater is. There will also be mention of some of the major characters of the first book. So if you haven’t read Rosewater, go out and do that now. I hope you enjoy it as much as I did.

Rosewater Insurrection, then, picks up the story fairly soon after the first book. The city of Rosewater, which has grown up around the alien incursion, has an uneasy relationship with the rest of Nigeria. Politicians inevitably want to control both the futuristic city and the alien that makes it possible. But the people of Rosewater also have ambitions for the future. And we should never forget the alien. Wormwood has come to Earth. It didn’t do so by accident.

While Kaaro does feature in the new book, he is not the principle character. That honor falls to his girlfriend, Aminat. As kick-ass heroines go, she’s pretty damn impressive. Her work for the secret service organisation, S45, puts her right at the center of the action, and most of the time she’s more than capable of doing the job, even though she’s technically a scientist, not a secret agent.

My favorite character in the book is Aminat’s boss, Femi Alaagomeiji. She’s smart, determined, ruthless, devious, and utterly untrustworthy. She’s everything that Colonel Hayley in Supergirl wants to be but isn’t. Thank goodness she’s not Nick Fury, or the Marvel Universe would be in dreadful trouble.

The plot of the book is a three-way power struggle for control of Rosewater. On one side we have the charismatic Jack Jacques, mayor of the city and its defender against the outside world. Ranged against him is the President of Nigeria who wants to keep control of a valuable resource. But we should never forget Wormwood. The alien has its own mission. The people who sent it to Earth expect it to carry out that mission. The Earthlings are largely incidental to its task.

As is necessary for an entertaining story, all sorts of things go wrong. Rosewater descends into chaos. Our heroes must struggle to survive and make alliances where they can. Tade Thompson handles this very well. But the book isn’t entirely a near-future thriller. There are definitely points being made. There are probably more than I, with my limited knowledge of Nigerian culture and history, am going to notice.

One of the unavoidable references is to Biafra. Most of you reading this will be too young to have lived through the terrible civil war that wracked Nigeria at the end of the 1960s. I was a kid then, and the TV coverage of the conflict has stayed with me. The war and its aftermath gave rise to the relief organisation, Médecins Sans Frontières. I don’t suppose I have fully understood the references that Tade is making, but the echoes are clearly there.

Another fairly obvious reference comes in the nature of Wormwood’s mission to Earth. I don’t want to give too much away here, but Wormwood is an alien and it has invaded Earth. There is an inevitable colonisation narrative here.

There is one other very interesting character in the book. Her name is Lora Asiko and she is Jack Jacques’ loyal assistant. I can’t tell you too much about her as that would definitely be major spoiler territory, but do keep an eye on her. She’s special.

We all know by now that there is a third book in the series. Rosewater Redemption will appear in due course, presumably next year. So don’t expect much in the way of resolution at the end of Rosewater Insurrection. What’s more you know that not everyone is going to die, no matter how bad things seem. But in terms of set-up for the final volume Tade has done a fine job. I’m very much looking forward to the next book. And I’m trusting Femi to save the world. She might double-cross everyone else, but she has humanity’s interests at heart. She’s the last person on Earth any alien would want to tangle with. 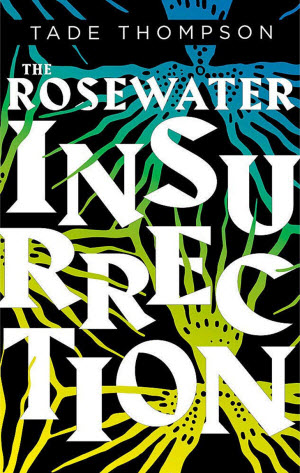