One of the themes of Analee Newitz’s The Future of Another Timeline is how much feminist history has been forgotten. Brave women do amazing things to advance the cause, but then nothing seems to change and we forget that they ever did anything. This is very much true of the science fiction community. Whenever I see an article that claims that there were no women in science fiction until recently, I wonder what happened to the glory days of the late 1970s. If you listen to Ellen Datlow’s interview from last issue you will hear her talking about how exciting those times were because suddenly women were appearing on award ballots.

Then there was cyberpunk, and women vanished from the scene. Even Pat Cadigan, despite the fact that she was one of the best of the new breed, was somehow deemed to have never existed. Only Le Guin has survived the purge of the popular imagination.

But Le Guin was not alone. There was Joanna Russ and Suzy McKee Charnas; there was Octavia Butler; there were feminist allies such as Samuel Delany and James Tiptree; and (among many others) there was Vonda McIntyre.

Despite winning the Hugo, Nebula and Locus awards for her second novel, Dreamsnake, McIntyre largely faded from the popular imagination soon thereafter. She got into writing Star Trek books. I’m told by those who know that her novelisations of some of the early films are much better than the films themselves, thought that may be a fairly low bar. She also did a lot of work behind the scenes, including being instrumental in setting up Book View Cafe. Handheld Press, which specialises in publishing work by unfairly overlooked women writers, has just released a new edition of McIntyre’s debut novel, The Exile Waiting.

In some ways this book is a prequel to Dreamsnake, in that it is set in the same world. In the far future, mankind has spread far from Earth. The Sphere is a rich and expanding region of human influence in the galaxy. Meanwhile the home planet is a dying ruin, almost forgotten. Jan Hikaru, a rich young man at a loss for purpose in life, has befriended an ancient starship navigator whose one remaining ambition is to see Earth one more time before she dies. This gives Jan the opportunity to find out what the homeworld is really like.

What he finds is not pleasant. Earth is mainly a forbidding world wrecked by war and wracked by storms that stir up the black sand covering the planet. Human life, such as it is, appears confined to Center, a small settlement based in an ancient fallout shelter and associated missile silos. Center is ruled through an uneasy truce between Lord Blaisse in his Palace, and the middle-class Families of Center. Most of the population seems to scrape by as beggars, slaves, or workers who might as well be slaves.

Center has a particular obsession with racial purity, not in the contemporary sense of white supremacy, but rather freedom from mutation. This is, remember, the 1970s. The idea that humans might mutate when exposed to radiation as very popular, and McIntyre was working on a postgraduate degree in genetics when she decided to quit academia and become a writer. Any child with an obvious mutation is exiled to the underground cave system where an entirely separate society is being formed, but some mutations are invisible.

The hero of the novel, Mischa, is a young girl who in another world might be a Prince in Waiting. She’s a genius, and has a telepathic relationship with her siblings. But in Center intellectual ability counts for nothing. Mischa’s only practical skills are physical, and she’s forged a career as a thief. She has to make money somehow because her cruel uncle is using her telepathic relationship with her siblings, in particular her disabled sister Gemini, to blackmail her into supporting him. Mischa would like nothing more than to get away from Center, but doing so would condemn her siblings to death.

The other key character of the story is the pilot of Jan’s ship, known only as Subtwo. He is part of a bizarre child rearing experiment detailed in the short story, “Cages”, also published in this volume. Subone and Subtwo are “pseudosibs”, young men reared in complete isolation from human society as an experiment by an arrogant psychologist. Both of them are deeply damaged by the experience, and Subtwo in particular has great difficulty with human relationships.

Inevitably the story is one of how Jan discovers Mischa and together they help Subtwo on his journey to becoming a functional human being. Along the way there are consequences for the people of Center as well. But more importantly the story is one of a triumph of human ability and spirit against social expectation. This passage stood out for me:

Mischa had never heard of any Families abandoning their children; she had assumed, like everyone else, that they were somehow immune to changes. “You don’t act like them.”

“I used to.” She touched the bright, fine hair on the top of her shoulders; it grew down her arms, across her back, and tapered to a point at the base of her spine. “When this started to grow I was frightened, but I thought I could hide it. I pulled out the hair, but it always grew back. That’s when I began to understand what it was like to be powerless.”

Today we might see that as an allegory for a trans kid. In 1975, when this book was published, trans people were barely known, and trans kids were certainly not an issue. But the story is the same. People should be valued for who they are, not for whether they fit into some rigid idea of social acceptability.

So what is McIntyre writing about? In her afterword in this volume, Una McCormack makes the point that most of the characters in the book are disabled in some way. The mutants, particularly Gemini, have obvious physical differences. Mischa and some of her friends have injuries as a result of punishments inflicted by the Center authorities. Subone and Subtwo are psychologically damaged, as are some of the children raised as slaves in the Palace. Mischa’s brother, Chris, has become a drug addict. Mischa, obviously, will escape to a new life of possibility in the Sphere, but this is not a story about how people’s disabilities are magically cured by science, it is a book about how people are valuable despite being seen as different.

Given the subject matter, I have put a link in this issue to my 2014 interview with Kathryn Allan about her work on disability in science fiction.

It should note also that McIntyre has gender-flipped the traditional teenage hero, which is relatively unusual for science fiction in the 1970s. However, the world of Center is still mostly Patriarchal, and it seems like the Sphere is too.

The Exile Waiting is a first novel. I think some of the pacing was a bit off, and I’m pretty sure that if McIntyre were still around she’d acknowledge that she’d become a much better writer over the years. However, it is a very interesting book, and one that touches on themes that we are still talking about in science fiction today. We shouldn’t be forgetting books like this. 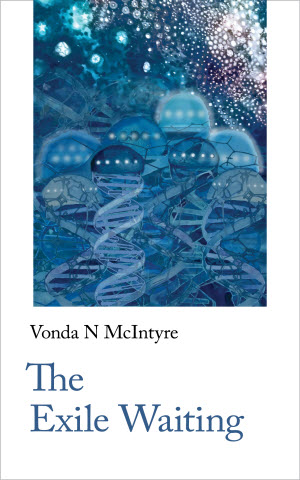