The people who complain that science fiction has been taken over by Social Justice Warriors often say that there is a lack of fun adventure stories. Obviously those people have not been reading Tim Pratt.

Of course they wouldn’t. Tim’s Axiom series does feature a plucky crew of misfits who happen to be in possession of some cutting-edge weaponry and who are trying to save the galaxy from a terrifying ancient race of aliens. There are some great characters, a lot of entertaining byplay between them, and just enough heart-stopping danger to keep us all reading. The problem is that some of the crew are women. Worse, some of them are lesbians; and some are disabled. There’s even a minor character who is trans. So despite the books having almost all of the features the whingers ask for, they won’t read them because they won’t read anything that has SJW cooties.

The captain of the White Raven is Callie Machedo. She used to be a freelance security consultant, but for reasons explained in the first book in the series, The Wrong Stars, she’s now the leader of the only group of people who know just how much danger the galaxy is in.

Callie’s life is made much easier by the presence of Elena Oh, a biologist who, in The Wrong Stars, was rescued from a lost colony ship. Elena and her fellow crew members had been in cryo-sleep for hundreds of years, so there are plenty of opportunities for “old people” jokes. Callie and Elena flirt regularly through book two, The Dreaming Stars.

We also have the engineer, Ashok, who is an enthusiastic early adopter of body modification technologies. If there is something he can plug into himself, he wants it. The ship’s doctor, Stephen, is a member of an obscure religious cult that believes it can find god through taking psychotropic drugs. The pilot and navigator, Janice and Drake, are literally inseparable, and they hate it.

Finally there is Lantern. She’s a Liar, a member of the only alien race that most humans know they have encountered. They are called Liars because they appear to be incapable of telling the truth about anything important. Ask five Liars the same question, and you will get five different answers, none of them correct. Liars have tentacles and rotational symmetry. One of the reasons they won’t level with humanity is that the truth about the universe is far too terrifying for us to handle. We wouldn’t believe it. We would poke our curious monkey noses in places where they should not be poked. And we would die. Horribly.

The Axiom series is great fun space opera. I have really enjoyed the first two books and I’m very much looking forward to book three later this year. 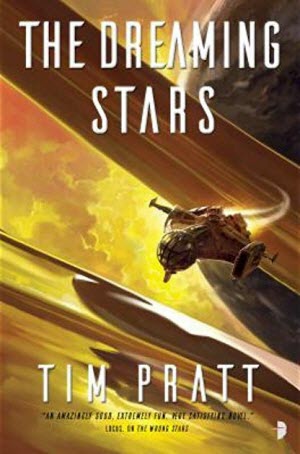