Many of you will recall that Rivers Solomon’s new novella, The Deep, is based on the Hugo-finalist clipping song of the same name. It is a story about a race of marine creatures who are descended from pregnant African women thrown overboard from slave ships. I interviewed Solomon about the book last year and have included that interview in the issue. I’m delighted to see that the book is finally out. Here’s the song as a reminder.

Before I start, a couple of quick words about the copyright page. There is no mention in the credits of the editor, Navah Wolfe. She is thanked profusely by both clipping and Solomon in their afterwords. Saga Press fired her recently, despite her having done some amazing work for them. Publishing is a rough business. Also the copyright note only lists the names of the members of clipping. That means that, although Solomon’s name is listed first on the cover, this book is work for hire. Presumably clipping’s lawyers insisted on that as part of the deal. Hopefully the book will garner Solomon an award or two to sweeten that particular pill. They deserve more than just a fee.

On now to the book, which is interesting and complicated because, as Solomon notes in the interview, it is hard to write something from the perspective of creatures that live underwater. The wajinru, as they have chosen to call them, are very alien. Their communication methods are very different to ours, though they have retained the power of human speech too.

The central character of the book is Yetu who is the Historian of the wajinru. That capital H is there with purpose. The entire history of the wajinru is steeped in trauma. Remembering where and how they came to be is deeply painful for them. Mostly they just want to forget, and live in the moment like the other creatures of the sea. But to do so would also be violence to their ancestors. So one wajinru out of all their people is selected to Remember. This is not a fun job.

The basic thrust of the plot is how Yetu comes to terms with both her job and the history that she has been selected to preserve. Along the way Solomon also fill us in on some of the gaps in wajinru history that are not found in the clipping song. As the band say in their afterword, this is not creating canon, it is creating story. There may be other versions of that story in the future. It is interesting that this parallels how Marlon James is approaching his fantasy story, but is very different from the (predominantly white) fannish obsession with canon.

There is another factor that comes into play with the story as well. The US edition (which I have) was published in November. I got my copy around the time of the annual Trans Day of Remembrance. Reading a book about remembering traumatic history written by a trans person of colour, at the time when I was having to lead a remembrance ceremony for trans people (mainly trans women of colour) who have been murdered, was a unique and disturbing experience.

Solomon does play with gender a bit in the book. We discover that the wajinru are truly hermaphroditic, being blessed with both “male” and “female” genitals. And yet we know that Yetu is definitely “she”. Other wajinru that we meet use “he” as their pronoun. This is never explained. Yetu probably doesn’t understand why humans would find it odd.

I think there are some readers who will find this book too dreamlike. Others may want something that is more angry. I will be interested to see other responses come in. For my part I definitely enjoyed it. Books narrated by characters who are decidedly alien are comparatively rare, and I’d like to see more SF writers attempt this form. 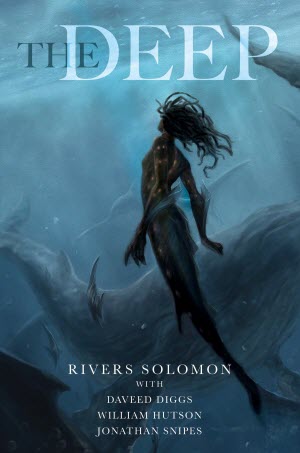