This book is the third and final instalment in what has become one of my favourite fantasy series of recent times. It began with The Tiger’s Daughter and continued in The Phoenix Empress. In these books K Arsenault Rivera has constructed a fascinating fantasy world based loosely on Japanese, Chinese and Mongolian cultures. She has also given us the most adorable pair of lesbian demon hunters in literature. Barsalai Shefali and Minami Shizuka are beautifully drawn, far from perfect, and passionately in love. As the series has been neatly wrapped up I don’t see how we’ll get more stories about them, and this makes me rather sad.

I didn’t do proper review of the other two books, and it is hard to review the third part of a trilogy without giving any spoilers for the first two volumes. I will do my best, but if you are highly spoiler-averse you might want to stop reading now.

Rivera has chosen a very interesting structure for the books. Both The Tiger’s Daughter and The Phoenix Empress are told in flashback as Shefali and Shizuka tell each other how their lives have gone over the past few years since they have been separated. This sets us up for the climactic conclusion in The Warrior Moon.

The story more or less begins with two other remarkable women: the Hokkaran Empress, Minami Shizuru, and the Qorin clan leader, Burqila Alshara. Their friendship puts an end to a long enmity between the Hokkarans and the Qorin. Their daughters are of a similar age and are raised together. Both of them prove to have extraordinary abilities, and they become inseparable.

The true story, however, begins generations ago with the arrival of The Traitor, a powerful demon with mysterious ties to the Minami royal family. The Traitor now controls much of the north of the country. His ability to infect mortals with blackblood, and thereby possess them, gives him massive armies. He preys particularly on the Qorin as their steppe-lands are adjacent to his territory, but his ambition is always directed towards the Hokkaran Empire whose throne he covets.

As The Warrior Moon opens, Shefali and Shizuka are finally in position to launch an assault on the north. Shefali has persuaded her mother to bring the Qorin clans to war, and Shizuka, now Empress, has the Phoenix Guard at her command. They aim to march on the Lost City of Iwa and put an end to the threat of The Traitor once and for all.

Time, however, is of the essence. Shefali is very sick, and a prophecy tells that she will not live past her next birthday. That is now mere weeks away. It is by no means certain that they will even reach Iwa in time. The two women had vowed to go into battle together, and now it seems that opportunity may be ripped away from them.

There are many things that I love about this series. The characters of Shefali and Shizuka are but a start. There is also a great supporting cast. I’m disappointed not to have any more of Ren in the final book, but we have a fine replacement in Minami Sakura, Shizuka’s long-long cousin who was abandoned at birth, raised in a brothel, and has become the Imperial Historian. I’m also very fond of Shefali’s cousin, Dorbentei Otgar, who gets her own moments of glory in the final book. These two represent the mortal people of the Hokkarans and Qorin, bearing witness to events that rapidly escalate far beyond mortal ken.

I also love the way Rivera has used her demon adversaries. They are cunning, duplicitous, and very snarky. Once beyond the Wall of Flowers, the combined army is trapped in a world where the weather and terrain can change rapidly and unexpectedly. Even time itself flows differently in The Traitor’s domain. To defeat him, Shefali and Shizuka must become as gods.

Finally, I love the ending. War is brutal. The Hokkaran Empire values beauty over all else. The Qorin value family. Both will be ripped apart in the final conflict. There is no happy ending that can erase the pain. Unlike many fantasy writers, Rivera understands this and is prepared to face up to it. In any case, what place is there for gods among mortals? Once their legend is written, all that they have is each other. 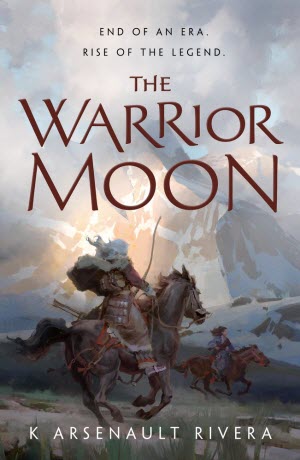