The Pleasant Profession of Robert A Heinlein In my time I have read rather a lot of academic studies of science fiction, but I don’t think I have read anything that comes close in depth and breadth of analysis as Farah Mendlesohn’s study of Heinlein. I’m by no means an expert on Heinlein myself, but I am seriously impressed with how exhaustive this book is. That does of course make it rather exhausting as well. It is very long, and I can see why Mendlesohn opted for crowdfunded publication rather than cut it down substantially as had been requested by the original publishers. Heinlein had a long career, had a huge influence on the field, and was a very complex person. You need a book like this to do him justice.

I am of course somewhat biased. I have known Mendlesohn for many years. When I read The Pleasant Profession of Robert A Heinlein I can hear her saying the words. I’m having to concentrate to stay professional and refer to her as Mendlesohn here rather than as Farah. However, the book has been favourably received by many other people, so I don’t think my estimation of it can be too far off base.

Because I know Mendlesohn, I happen to think that she’s an ideal person to write this book. Although she is best known as a scholar of science fiction, her original training was as an historian and her specialty was American history. That gives her a head start in understanding the political background against which Heinlein’s life and opinions need to be understood. She has also very successfully navigated the patriarchal world of academia while remaining staunchly feminist which is something I think that Heinlein would have admired, even if the two of them might have disagreed significantly over other issues.

The structure of the book is relatively straightforward. Mendlesohn begins with an overview of Heinlein’s life, concentrating on key experiences that shaped his career and political opinions, and preparing the reader for the fact that those opinions will not stay static through his long career as a writer. She then has a chapter covering his entire output at a fairly high level, and two chapters examining how Heinlein constructs his fiction. The rest of the book looks in depth at a variety of themes that are common to Heinlein’s writing, all but one of which are political in some way. There are sections on how Heinlein thinks that society should be organised, on how the individual should behave within society, on racism, on sexuality and on gender. The only non-political section is one on how Heinlein uses characters’ relations to cats as an indicator as to whether they are to be seen as good or bad people.

One of the things that shines very clearly out of Mendlesohn’s analysis is that Heinlein’s actual politics were very different from those of the people who have since fetishized his work. He is very much a believer in community (but not Communism), and that is strongly at odds with the extreme individualist ideas of many American Libertarians.

Heinlein is also very clearly liberal in his views on sexuality, albeit with a bit of ick factor when it comes to male-male encounters. There is a lot of queerness in his work, and a great deal of polyamory. He’s a huge advocate of the importance of consent in sexual relations, which is very different to the dominance narrative of the Alt-Right.

Against that Mendlesohn illustrates where Heinlein’s attitudes are coloured by the times in which he lived, and would be seen as much less liberal today. Part of this, it seems to me, is that he is strongly influenced by Protestant ideas of individual responsibility which conflicts with our modern understanding that people can be victims of oppressive social structures and cannot simply haul themselves up by their own bootstraps. Also Heinlein’s feminism seems to me to be rooted in the idea that Patriarchy is a given and that the right course of action for a woman is therefore to navigate it to her advantage, rather than to kick against it. Mendlesohn doesn’t state either of these two points as conclusions, so I may be mis-reading here her, but they are clear messages that I took from the book.

Where there is a clear message is when Mendlesohn is discussion Heinlein’s attitudes to race. There are times when he very clearly makes an effort to include a racially diverse cast of characters (Mendlesohn provides a list of the names of characters in Starship Troopers as an example). There are also examples where black characters are portrayed as clearly more moral than the white characters in the books. These are things which, if an author does them today, will have the reactionary fanboy crowd screaming “Political Correctness!”. However, Mendlesohn also shows that Heinlein is largely unaware of racist cultural assumptions that he grew up with, and which creep into his work even though he is trying to present himself as liberal.

The one area where I am not entirely agreement with Mendlesohn is her discussion of gender, and in particular trans issues. I Will Fear No Evil and Friday are both books that I know fairly well, having read both more than once. I also have a fair amount of lived experience on trans issues, and have to be fairly expert on the diversity of the trans community in order to do the training work I do.

On the other hand, I can see that I got off on the wrong foot with this section. Though I try very hard to avoid policing language with regard to trans issues because it is so much in flux, I still find that the use of “transgender” as a noun or verb sets my teeth on edge. Also Mendlesohn cites Alice Dreger on several occasions, and while I haven’t read the book she’s using I’m immediately on the defensive given what I know of Dreger’s views on trans people.

Unfortunately I don’t have the time right now to make an in depth critique of this section, nor would it be appropriate here as it would be a lot longer than the rest of the review. Hopefully I can get that done in the near future.

In the meantime I warmly recommend this book, both to anyone with an interest in the work of Heinlein, and to anyone who wants to see just how comprehensive a work of literary criticism can be. 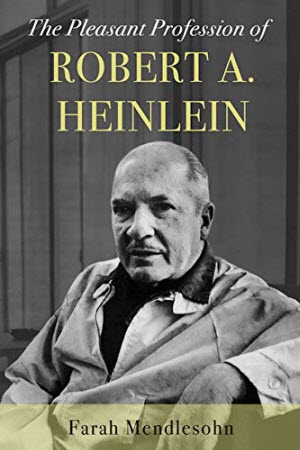