Those of you who follow such developments closely will know that Juliet E. McKenna now has an alter-ego, a seemingly genderless person known as JM Alvey who writes murder mysteries set in Ancient Greece. Juliet has written a bit on her own blog as to why this happened, and why she has now unmasked Mx Alvey. I don’t want to add to that save to note that Juliet has a degree in Classics from Oxford and knows far more about Ancient Greece than most people (especially male politicians who fetishize the Spartans).

There are two books under the Alvey pen name: Shadows of Athens and Scorpions in Corinth. I don’t publish them. Of course Juliet is a dear friend so you may think that my views are somewhat biased, but here goes with a review of the first one anyway.

One thing that struck me about the book is that it reads quite similarly to the Green Man books. They are all mystery novels, and both series star a male protagonist who is a decent fellow rather than a tortured loner. Daniel Mackmain does have to keep himself to himself much of the time, but he’s still a very sociable bloke. In contrast Philocles, the star of the Alvey books, is very sociable indeed because he’s a playwright and has to be.

McKenna hasn’t adopted a new voice for these books. When reading them, if you are familiar with her past work, you will know that you are reading a McKenna novel. I think this is probably wise. Trying to maintain a Greek voice throughout would have been quite challenging, and almost certain to attract accusations of pastiche. Besides, who knows what ancient Athenians really spoke like?

There are related issues as well. At one point in the book McKenna mentions the Etruscans, and notes that they live in a place called “Italy”. Now of course no one in the Athens of 443 BCE would use that term. However, none of the terms that they would use would be familiar to a modern audience. So the choice is either use an anachronistic term, or turn the book into a history lesson. McKenna has opted for the former, and I think that is a wise choice.

Besides, there are other areas where the casual reader is far more liable to yell “unrealistic!”, and be utterly wrong. To start with many of the Athenian men have sex with other men, and in particular young boys. Yes, this was entirely common. McKenna doesn’t make much of it, but it is a very real part of the culture of that place and time.

What McKenna does emphasise is the multi-cultural nature of Athenian society. The books are set between the Persian and Peloponnesian wars. Athens is becoming a hugely important trading nation, and people from all over the known world visit. Philocles himself is an Athenian citizen. However, his girlfriend, Zosime, is Cretan, and her father, Menkaure, is Egyptian. Philocles owns a slave, Kadous, who is from Phrygia, a state in the centre of what is modern Turkey. The city of Athens employs a group of Scythians, horsemen from the steppes of Asia, as a sort of police force. And Aristarchos, Philocles’ patron, owns a slave/bodyguard from “some mountainous land far beyond the Black Sea” (what we now call Georgia). All of this is perfectly reasonable, as is the fact that the villains of the story are probably being paid by the Persians to stir up trouble.

I have mentioned slaves. Yes, Athens was a slave-owning society. The social position of slaves was rather different to that of people of colour in Antebellum American, but they were still slaves. Athens was also one of the most misogynist ancient cultures I know of, and part of this comes through in the story as well. One of the probable reasons why McKenna has made Zosime a Cretan is precisely to allow her more agency than any respectable Athenian woman would dare to claim.

And yes, childbirth is deadly.

I mentioned earlier that Philocles is a playwright. To be precise, he writes comedies. McKenna studied the works of Aristophanes and the like at Oxford. Shadows of Athens is set against the background of the Dionysia Festival, part of which is a number of play-writing contests. Philocles and his troop of actors have an entry in the comedy section and are looking for their first big break.

McKenna brings all of her knowledge of Athenian theatre to this. She knows the sorts of plays that they would stage, the types of actors and musicians required, and the often political nature of the subject matter. This has allowed her to draft an outline of the play that Philocles has written for the contest. We don’t get to see the whole thing, but we do get the general idea and it sounds very like the real thing.

I have not said much about the plot because this is a murder mystery and I don’t want to risk dropping clues. What I will say is that, like most of McKenna’s fiction, this book has a political subtext. It is the best book about fake news that I have read this year. And yes, it is set in Ancient Athens, but the machinations of politicians and greedy businessmen don’t change much down the millennia.

So, if you like a good murder mystery, and could like to learn a lot about Classical Athens along the way, do check out these books. This is Juliet McKenna, you know they are going to be very readable. 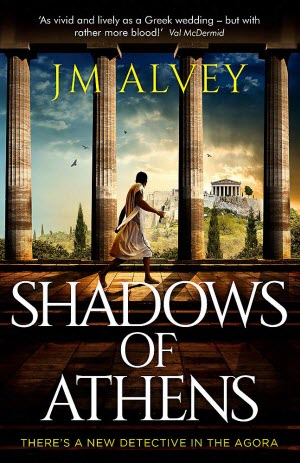