Jeanette Winterson’s latest book is a pastiche on Frankenstein, and also very much a science fiction novel. Even if it didn’t have a trans main character, it would deserve a review here. Given that additional fact, I really can’t ignore it.

Once upon a time a group of young friends rented a house on the shores of Lake Geneva. The weather was awful and, being mostly writers, they set themselves a challenge of producing a story each. John Polidori, Lord Byron’s physician, wrote a short story called The Vampyre which kickstarted our passion for toothy bloodsuckers. And 19-year-old Mary Shelley invented science fiction.

Well, if you ignore Margaret Cavendish, and the more bizarre satires of Lucian of Samosata. Whatever your views on the origins of science fiction, Mary Shelley wrote a book that to this day is one of the best-known works of English literature. Despite not sucking anyone’s blood, Victor Frankenstein’s monster seems to be able to live forever. And so, by extension, does his creator.

Fast forward now to the 21st Century and FranKissStein. Britain is in the grip of Brexit fever, but that can’t stop the march of science. Ron Lord (Lord, Ron, get it?), the Alan Sugar of sex dolls, is establishing himself as a player on the world stage. His little business founded in a Welsh village now has factories in China and customers all over the globe. He’s in the USA at a technology fair hoping to pick up tips on the latest developments in AI.

As an aside, there is indeed a village in Wales called Three Cocks. It is just north of the Brecon Beacons, and not far from Hay-on-Wye, which is doubtless how Winterson came to hear of it.

Professor Victor Stein is a technology guru of similar stature to Ray Kurzweil. He is the king of AI, the man who will bring us the Coming Race (I’m disappointed that Winterson didn’t use that pun) of artificial beings. He also has a strong interest in cryogenics.

Polly D is a journalist for Vanity Fair (journalists, bloodsuckers, yes they do have something in common). She’s an outspoken feminist and she’s sure that Stein is up to no good. She finds Lord repugnant. If the two of them end up working together (and you know they must) it will set off all sorts of alarm bells in her conspiracy-detector mind.

Into this mess walks Dr Ry Shelley. Everyone assumes that Ry is short for Ryan, and most people call him that, but it is actually short for Mary. Ry is an assigned-female-at-birth (afab) trans person who has undergone top surgery, but nothing down below. Though he lives as a man, and uses he/him pronouns, he identifies as non-binary. He is both the poet and the novelist in one body, the perfect married couple.

With this set-up, Winterson takes us on a tour of the current state of transhumanism and robotics. The book came out too soon after Kate Devlin’s Turned On for Winterson to have used that as a source, so I guess the two of them were reading the same research material at around the same time. Devlin’s book is a factual survey of the field. Winterson’s is an hilarious romp.

Well, it is hilarious as long as you are not a man. If you are you may well have an attack of the man-feels on reading it; and have to send a bunch of dick pics to random queer women on Twitter in order to reassert your masculinity. But this is Jeanette Winterson. What did you expect?

Also it gets a bit serious and woo-woo towards the end, which is all well and good from my point of view.

Being neither afab nor non-binary, I can’t give any opinion on whether Ry is a good portrait of such a person. I would love to see reviews of the book by such people. What I can say is that it isn’t a bad portrait. Winterson is clearly sympathetic to trans people, and that’s despite being a lesbian and a member of the British literary establishment, which is pretty much the definition of a transphobe these days. She makes a point of illustrating the constant microaggression that people like Ry are subjected to (in Ry’s case mainly from Lord, who thinks he’s being clever). There is one point (Content Warning!) where Ry is the victim of sexual assault. And frankly his relationship with Stein is deeply dysfunctional and exploitative. Stein, of course, exploits everyone, but he makes a special case of Ry.

There are a couple of points where Winterson’s research on trans people is a little behind the times. (If you ever read this, Jeanette, it turns out that the whole thing about trans women’s vaginas being wounds that will never heal is yet another lie made up by doctors to discourage us from transitioning. Bodies are remarkably adaptable.) I’m sure there will be trans people who like the book less than I do, especially if they are people who will immediately identify closely with Ry. But it could have been so much worse, and it isn’t.

I’m also fairly pleased with the book as science fiction. Winterson is definitely not slumming it. She doesn’t make any grandiose predictions about the future of humanity, but she has done her research on the current state of the technology. She also appears to have left a little Easter Egg for us.

Later in the book we are introduced to a character called Jack Good, who was once a friend of Victor Stein’s. He’s a gay man, who fled England in fear after the Turing disaster, who lived on into his nineties, and who was involved in the making of 2001: A Space Odyssey. Sir Arthur C Clarke was not Jewish; he worked in radar rather than at Bletchley Park with Turing; and he wasn’t a pioneer of cryogenics; but his life history is otherwise remarkably similar to Good’s. I don’t think this was an accident.

The book is a piece of literary fiction, so don’t expect a neatly resolved adventure story. As long as you are OK with that (and not troubled by jokes at the expense of men) there’s a good chance you’ll enjoy it. I was a little disappointed that Winterson didn’t manage to work in Mary Shelley’s friendship with the trans man, Walter Douglas (who wrote as David Lyndsay), but you can’t have everything. These days I’m very relieved simply to read a book by a cis woman about a trans character that isn’t horrible. 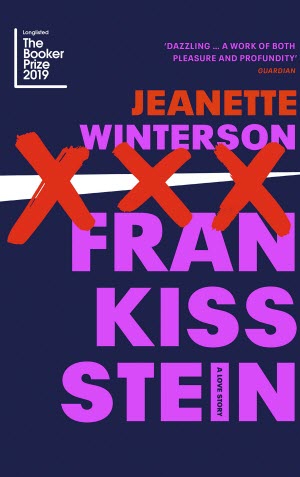