By the end of the first chapter I was totally hooked on this book and knew that I would whiz through it is a day or two. And I did. However, by the time I got to the end I had, not exactly fallen out of love with it, but rather ceased to love it quite as much as I did initially. Explaining why will require this review to be slightly more spoilerly that what I would normally write. You have been warned.

First, however, I should set the scene. Brightfall by Jamie Lee Moyer is a novel of Sherwood, but a very different take than we are used to. It is 12 years since Robin Hood and his band of Merry Men terrorised the Sheriff of Nottingham. King Richard is dead and John Lackland sits upon the throne of England. Little John has got married and started a farm. Midge has gone home to run his father’s mill. Tuck has become an abbot. Marian lives in a small cottage in the forest, bringing up the twin children that she had with Robin. And as for the Earl of Locksley, he has retreated to Tuck’s monastery to devote himself to God and atone for his sins.

We see the story through Marian’s eyes. In chapter one she is visited by a monk from Tuck’s Abbey. He bears bad news. Will Scarlet is dead. So is John’s son, Ethan. So is Midge. Other former members of the band have also died, all in mysterious circumstances. So mysterious that Tuck suspects magic was used to kill them. Marian, being something of a witch, is the only member of the band with the skill to track down the killer.

It is at this point also that we discover that Robin has put Marian aside, even had a bishop annul their marriage. Marian has found solace in the arms of Will, here cast as Robin’s younger brother. Clearly something has gone very wrong with the Merry Men, and perhaps that wrongness will lead us to the murderer.

I think you’ll agree that’s a pretty explosive beginning to a book. I can understand why many people love it. Juliet did, and it was her review that encouraged me to buy it in the first place. The problems I had with it are subtle, and probably a result of my reading it with my editor hat on. If you haven’t stopped reading yet, here’s where you might want to.

The first thing that occurred to me as I read through the book is that we were missing Robin’s voice. He was clearly going to be a key character in the story. Marian might be the viewpoint character, but she doesn’t really go on a journey. She just goes there and back again. It is Robin who has to come to terms with what he has done in his life; to finally stop hiding behind God and take responsibility for putting things right. And yet all we see of him in the book is a brooding, selfish, angry man who spouts religious nonsense whenever challenged.

Had I had this book submitted to me, I might have asked that it be re-written to have some chapters written from Robin’s viewpoint. It would have been hard. He would have been a very unreliable narrator, if only because he clearly lying to himself as much as he is lying to his former friends and lover. But I think we would have got a much better book as a result.

The other issue that slowly bubbled up in my mind as I read is that the book does not concern itself with the Matter of Sherwood. King John is mentioned in passing every so often. The Sheriff of Nottingham is presumably disgraced or dead; and replaced with someone less rapacious. There is no mention of Saxons and Normans. The Merry Men are in this book to provide a familiar cast of characters, nothing more.

Instead what we have is a story about intrigue in the Fae Court that blows apart a human marriage and threatens to unleash all sorts of chaos in its wake. It is a story of (mostly) good Paganism against (mostly) bad Christianity; a story of a good woman and her woefully inadequate run-away husband. While I might be naturally sympathetic to the Pagan viewpoint I would have liked to hear more from Tuck because I have a lot of Christian friends, some of whom are perfectly OK with Paganism, and who have just as much problem with Hellfire punishment narratives as Marian does.

There are a couple of other things that bothered me about the book as well. This description of one of the villains, for example:

A bend in Mikal’s spine cocked one shoulder above the other, perhaps explaining something of why the Lady had passed him over in favour of his brother. He might have won top ranking, but in the Fae a twisted body was a sign of mixed blood, most often true goblin or greenmen.”

I can see how the Fae court might be rather more prejudiced against disability than human society, and this might turn someone bad, but there was no need for it at all. Another explanation could have been given. And there’s that mention of mixed blood. If you look at the story from the right angle, it is fundamentally one of the dangers of mixed marriages.

It bothered me throughout that the main villain was referred to constantly as “the Demisang” (the Halfblood). I understand that with the Fae you cannot use anyone’s real name because names have power, but words have power too and some hurt more than others. By the time you get to the end of the book the narrative has become one of how the child of a mixed-race union can have problems growing up because of the difficulty of adapting to two different cultures. Of course it doesn’t help if the father is an irresponsible shitbag who runs away at the slightest sign of child-rearing difficulty, and the mother doesn’t exactly win any prizes for sensitivity and compassion either, but the entire narrative turns on the cross-cultural issue. It is, at least to my eyes, the moral of the story.

All of which is desperately sad because the book is beautifully written and has a superb premise. I very much wanted to love it, and I still enjoyed reading it. Had it been written 50 years ago I might have understood that it was written within a prevailing social context that was heavily prejudiced against mixed marriages. These days I can’t give it that much leeway.

I’m fairly sure that Moyer didn’t intend the book to be taken in this way. I think it is much more likely that she intended it be to be a Pagans v Christians narrative. But this is one of those things that, once you have seen it, you can’t un-see. And I have read enough of Aliette de Bodard’s complaints about the treatment of mixed-race characters not to fail to spot this one. 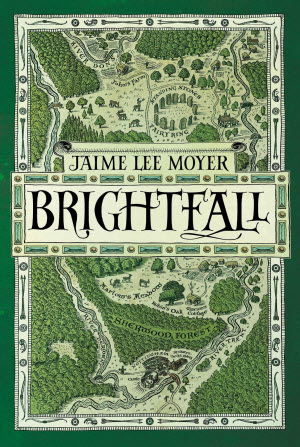