I think I first met Kate Heartfield at the Montréal Worldcon in 2009, but we’d been corresponding before that. She was still working as a journalist and I was delighted to find someone of that ilk who was both a feminist and interested in science fiction. Since then she has become a published author. Her novel, Armed in Her Fashion, was one of the most imaginative and daring fantasy debuts I have seen in a long time. It is set in a version of mediaeval Europe that could come right out of the mind of Hieronymous Bosch, and it features an excellent portrayal of a mediaeval trans man. I am delighted to see that it won the 2019 Prix Aurora for the best SF&F novel from Canada.

This current review is of something very different. Alice Payne Arrives is a steampunk time war novella. Yes, time war stories are a thing right now. But first, a little introduction.

It is 1788. Colonel Payne has returned from the war in the Americas “much changed”, for which read, “not entirely in his right mind.” He also has serious debts. His daughter, Alice, is at her wits’ end trying to make ends meet. Some of the servants have had to be laid off, but there are really only two ways out: marriage, or a life of crime.

Marriage is unlikely to be an option, because Alice was born in Jamaica and takes after her mother in skin colour. What’s more, she has recently embarked on a passionate affair with her companion, Jane Hodgson. Jane is an ingenious maker of automata, and this proves rather useful in Alice’s new career as a highwayman.

Meanwhile, in the 22nd Century, war is raging. It is known as The History War, and at stake is control of time itself. Yes, I know, we’ve been here before this year. There was Kameron Hurley’s The Light Brigade, and This is How You Lose the Time War from Amal El-Mohtar and Max Gladstone. There must be something in the water. Either that or agents of the various factions involved in a real Time War are softening us up by seeding ideas into our timeline. Look, 2016 was a clusterfuck. Everyone knows that. It isn’t surprising that time travellers are here trying to undo the mess.

In Heartfield’s story, however, 2016 is really only a symptom of a much larger problem. Rapid social change began long before that. Which is why Major Prudence Zuniga of the faction known as The Farmers has taken an interest in events in 1788.

This being a novella, there isn’t a huge amount of plot. However, there is a sequel (well, at least one) so the various threads have been left nicely dangling. On the way there we get some interesting musing on the difficulties of actually changing history, and a fair amount of feminism. Alice and Jane make an interesting couple: the one headstrong and fearless, the other calculating and cautious. There is an added complication in that Alice is bisexual and seems to have a strong interest in her father’s friend, Captain Auden, who inconveniently happens to be what passes for the law enforcement agencies in their little part of rural Hampshire.

Fortunately I already have the second book. I shall be reporting back on that one next issue. 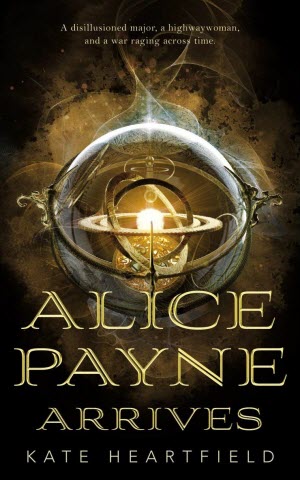