I know Liz Gloyn through the Women’s Classical Committee, a support group for women who study the Classics, of which I am a member. Before I actually met her in person, however, I saw her on a documentary series called Myths & Monsters which is available on Netflix. When I heard that she was writing a book on monsters I knew I needed to read it.

I should point out that Gloyn is not an expert on fantastic literature (or indeed any other media in which fantastical beasts appear). She is, however, an avid consumer of popular culture, as this review should make clear. In addition, she is an expert on the ancient world. That gives her an inside track on the origins of Classical monsters, and how they were seen at the time.

Of course, the way in which a Mycenaean Greek thought of Medusa or the Minotaur is very different from the way in which an Imperial Roman would see the same creature. And, as Gloyn notes, her book falls within the remit of Reception Studies which is all about how the subject is seen in the period under discussion. Nevertheless, the Classical insight is valuable in tracing the development of the careers of the various monsters. It also turns up some lovely little gems. I had no idea that archaeologists have found several shrines in Greece apparently erected by victims of nympholepsy: that is, they were erected by people who believed that they had been abducted by nymphs.

The theory section sets out Gloyn’s plan for the book and provides a basic introduction to the creatures under study. It includes a chapter titled, “Classical Monsters and Where to Find Them”. Gloyn is well aware that she cannot hope to cover the whole field. Monsters run amok in modern media, everywhere from books and comics to film and TV to video games and table-top role-playing. All that she can hope to do is draw a map. Here Be Monsters. And there will be many more to be found.

To me one of the most interesting aspects of the book is the agency that it gives to the monsters themselves. One might expect an expert Classicist to first set out the nature of each monster, as defined in Classical myth, and then get all curmudgeonly about how inauthentically they are represented by Hollywood, or in the D&D Monster Manual. Gloyn does nothing of the sort. Instead she regards each monster as an independent cultural meme that keeps popping up in new guises, adapting itself to whatever environment it finds itself in. Classical monsters, it turns out, are particularly resilient and adaptable, at least for now. That is in part due to the fact that most of them have no definitive source text.

The film and TV case studies cover a range of productions including the works of Harry Harryhausen, the Hercules and Xena TV series, and Doctor Who. Sadly monsters are not a major part of the Xena storyline. Much more time has to be spent on Hercules whose career is basically that of a monster slayer. Unexpectedly this section has left me with a desire to watch Dwayne Johnson’s 2014 film of the Hercules legend which sounds far more intelligent that I would have expected from something designed to allow The Rock to show off his muscles.

Gloyn makes some interesting observations on the effect of film on monsters, in particular freezing their appearance as if we partake of Medusa’s power when watching them. Giving Medusa a snake body from the waist down was Harryhausen’s idea, but almost every version of her since has followed his lead. Gloyn is also sceptical of the value of CGI, seeing is at focussing on the technical wizardry of the image at the expense of the monster’s character. (I’d be interested to know her view of Benedict Cumberbatch’s portrayal of Smaug, which I felt was one of the few bright spots in the otherwise execrable Hobbit movies.)

The two monster case studies are on Medusa and the Minotaur. The latter includes Sara Douglass’s Troy Game series which I really should have read back when I was doing Emerald City. It also, rather strangely, includes Neverwhere. The description of the Beast of London in the book is very clear: it is a pig-like beast with razor-sharp tusks. I’m pretty sure I remember Neil telling me that it was inspired by Twrch Trwyth, the giant boar from the Mabinogion that is hunted by Arthur in Culhwch and Olwen. However, the Beast does live in a labyrinth, which is very much a Minotaur thing to do. And of course in the BBC television series it was infamously played by a rather placid highland cow.

Those of you who have seen my Amazons talk will have heard me talk about how the legend of Medusa may have been inspired by African women warriors who wore their hair in dreads. Diodorus Siculus talks of the Gorgons as a tribe of women warriors who lived in Libya, and Ovid also notes that Perseus flew over Libya on his way home after killing Medusa. You only have to look at the more ancient Greek depictions of the Gorgons to see that they are black. The beautiful white woman with actual snakes on her head as opposed to dreads is mostly a Roman invention, though as I recall Classical Greece started it. Much to my delight, Gloyn cites Dorothea Smartt as having come to the same conclusion; and having written a performance piece about Medusa based on this.

I think this book will appeal to anyone with an interest in monsters and their place in popular culture. It is possible that experienced fantasy scholars will find some of it a little obvious, but most readers should learn a lot. What’s more, unusually for an academic text, the paperback and Kindle versions are reasonably priced.

I accepted a review copy of this book from Bloomsbury’s academic division because they still believe that a reviewer is an independent expert, not a paid employee of the publisher. 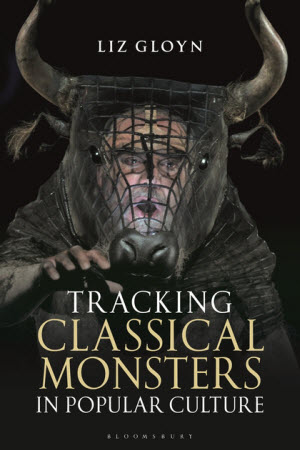