The Heart of the Circle When I was looking for new people to meet at Worldcon, my Israeli friends were adamant that I should make the acquaintance of Keren Landsman. She has a novel out in translation from Angry Robot, and it has queer content, so it was a no-brainer for me. I’m pleased to say that it was also an excellent decision. Keren was clearly the life and soul of the Israeli delegation in Dublin. I warmed to her immediately. But I still had to read the book. Here are some thoughts.

The first thing to note is that, while this is Landsman’s first book in English, she is no novice. She is a three-time winner of the Geffen Award, Israel’s national award for speculative fiction. That included an award for the novel, Broken Skies, in 2015. The translator is Daniela Zamir who, according to her LinkedIn profile, has 9 years’ experience as a freelance translator and an academic career in areas such as gender studies and political science, which would certainly have stood her in good stead with regard to this book.

In an interview for Civilian Reader, Landsman states that The Heart of the Circle was inspired in part by the news that a 16-year-old girl was murdered during Jerusalem Pride. She states, “We live in a country where religion and inequality influence every waking hour, and you can’t dismiss it.” The book therefore falls pretty squarely into allegory territory.

The Heart of the Circle is set in Tel Aviv which, my Israeli friends tell me, is the most liberal city in the country. Several of the main characters are queer, including the hero, Reed. However, it is not their queerness that sets them apart. Rather their difference is a result of them having magical powers. In another universe they might have been called Mutants, but in Landsman’s world sorcerers have always existed. Many of them have elemental powers of either air, earth, water or fire, but some are empaths and others precogs.

A slight diversion into worldbuilding here. Landsman takes a cue from modern queer culture and has the sorcerer community adopt nicknames for the various subcategories. Empaths are “moodies” and precogs ae “damuses” (a contraction of Nostradamuses). Cleverly she has young sorcerers adopt a completely different set of nicknames, and also has the American visitors in the novel have their own terminology. This tells me that she has spent some time mixing with trans people.

Back with the book, however, we have to address the issue that real queer people do not have superpowers. We certainly can’t defend ourselves from attack by casting spells. There’s a common criticism of the X-Men as queer allegory that goes along exactly these lines. Nevertheless, queer people, and these days in particular trans people, are claimed to have magical powers by the media. Trans people are, if you choose to believe what is written about us, incredibly powerful politically, able to immediately shut down any voice raised against us, and to force government to do our bidding. We also have the magical power of turning anyone we meet trans. Young people are, allegedly, particularly susceptible to catching Trans Cooties. Landsman also makes good use of the religious conflicts in her own country, taking Old Testament condemnations of sorcery as actual ancient reactions to the existence of sorcerers. That, of course, parallels the common appeals to Biblical (or other religious) authority by people wishing to attack queer folk.

So the allegory works. Or at least it works as well as the X-Men, and they have been accepted as queer allegory for a long time. What about the science fiction? This aspect of the book is dependent critically on the existence of precognition.

If you have people in your story who can see the future, that creates particular issues for the plot. We have understood this at least since the days of the all-knowing Hari Seldon, whose psychohistory could unerringly predict the future course of galactic history. Before long Asimov realised the trap he had created for himself, and he introduced The Mule, a character born with the ability to foil psychohistory’s predictions.

Landsman has the benefit of learning from Asimov, and many other writers who have tackled the same themes. In her world damuses from rival groups plot to influence multiple potential timelines so that they coalesce into a desired actual future. If a particular person is destined to become an important political leader, that person’s enemies will have their damuses try to arrange an assassination. Groups of damuses working in opposition can be kept busy playing chess against each other with future timelines as their boards and living humans as their pieces.

In the case of the book the enemies are the Sons of Simeon. I’m no Biblical scholar, but I’m assuming this is a reference to the second son of Jacob who was notoriously zealous in his desire to cleanse the world of sinners and unbelievers. He was also one of the ringleaders when Joseph’s brothers decided to gang up on him for being too flamboyant in his clothing (something that some of my queer Jewish friends have taken to be an implication that Joseph was gay, because clearly only a gay man would wear a rainbow coat).

Anyway, the Sons of Simeon are a group dedicated to the eradication of sorcerers. They are the ones who turn up at Sorcerer Pride rallies and try to murder the attendees. Interestingly they are sorcerers themselves, which provides parallels to the small group of trans women who have aligned themselves with the anti-trans movement.

The basic plot of the book is that Reed is a pro-sorcerer activist who can’t stop himself from volunteering, standing up for the cause, going on demonstrations and so on. His parents and his non-sorcerer brother, Matthew, are beside themselves with worry. Reed doesn’t share their concern. His flatmate and best buddy, Daphne, is one of the best damuses around, and if she hasn’t foreseen him getting killed then he’ll be OK.

Which is fine up until the point when the future timelines shift and Daphne informs Reed that his time is up. He could save himself, but what she sees is him giving his life to protect someone else. Being Reed, he’s not going to prevent himself from doing that.

The plot then boils down to finding a way to cheat this new future. It is a difficult thing for a writer to pull off. How can you change the future when a whole lot of people who are your enemies can foresee your every move? Landsman goes for a fairly obvious answer, but to many readers this type of story may be new. In any case the plot resolution is by no means the only important aspect of the book. There’s plenty of great characterisation, a fair amount of gay sex, and a solid understanding of queer culture. Landsman also puts her day job in medicine and public health advocacy to work in the worldbuilding.

Finally, I should note that, because this book is written by an Israeli living in Israel, there are aspects to it that reflect Israeli culture. Things that you would not find in a typical American novel. For example, all the characters talk about military service. It is a fact of life for them. Something that they assume everyone does. I also had to keep reminding myself that none of the Biblical references would be to the New Testament. One of the reasons I love translated fiction is the glimpse into another world that you get from it. 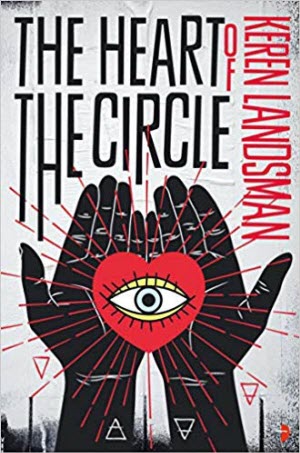