I read this one as part of my Hugo voting research (unusually I had read 4 of the 6 finalists before the ballot was announced, which I think makes this a Very Good Year). However, I held off reviewing it until voting closed because it seemed unfair to do just one, and because I have a particular take on the book.

The Calculating Stars tells the story of Elma York, who was a WASP pilot during WWII but is now having to adjust to a world in which little ladies are supposed to stay at home and keep house while their menfolk do all of the fun and money-making stuff. Fortunately for Elma, she is a genius mathematician, so job openings do exist.

Those openings suddenly get a lot more commonplace in 1952 when a Bigger-than-Chicxulub meteorite destroys most of the Eastern USA and ushers in what looks like being extinction-level climate change. It seems that humanity’s only hope is to escape Earth and make our home elsewhere. As a consequence, the space programme suddenly becomes an international top priority.

Elma’s husband, Nathaniel, being a genius engineer, gets one of the top jobs at the space agency and is soon in charge of the space flight programme. Elma wants to be an astronaut, but such jobs are reserved for men. Instead she has to content herself with working as a Computer, one of the many human mathematicians whose job it is do all the calculations that the engineers need doing, because the calculating machines that IBM have produced are frankly not up to the job. If you have seen or read Hidden Figures you’ll know what this is all about.

From there on the plot is very predictable. Elma keeps wanting to do astronaut stuff. The men, primarily the misogynist chief astronaut, Colonel Stetson Parker, keep getting in her way, but they cannot thwart the needs of the programme, nor the arc of history, forever. While the exact means of Elma’s triumph isn’t easily predicted, the fact that she will triumph is obvious.

There are things that Mary Robinette does extremely well. She captures the misogyny, antisemitism and racism of 1950s America. She has conflict between those women who are happy to play the role of sex object, those who prefer to work behind the scenes, and those who are the public face of feminism. She has Elma confront her white privilege. She has black women who are prepared to trust her attempts to help, and those who unable to do so. There’s a lot of admirable politics in the book.

Another aspect to the book is a venture into Emma Newman territory. As the wife of the chief engineer, a pretty young woman, and a good communicator, Elma quickly becomes the public face of the space programme. But she is terrified of public speaking and suffers massive anxiety attacks. Her struggles with this, and the inevitable point at which it gets used against her, are a significant plot strand.

Finally, Mary Robinette has spent a lot of time hanging out with actual astronauts and NASA people. I have no actual idea whether there are any holes or short-cuts in her portrayal of the technical issues, but the science sure sounds very convincing. For all its intersectional feminist politics, this is a hard science fiction novel.

I should also add, from a personal point of view, that it is a pleasure to find a book that features a husband and wife team who are both very competent in their own fields, who love each other very much, and who work well together. It is kind of like how the MCU has been portraying Hank and Janet, although us long-time Marvel fans all know that Hank Pym couldn’t tie his shoelaces without Janet to show him where his feet are.

The Calculating Stars has already walked off with the Nebula, and with the Locus Award for Science Fiction Novel. I expect it to win the Hugo as well. Perhaps, in this year when we are celebrating the 50th anniversary of the first Moon Landing, and Carol Danvers is everyone’s favorite superhero, this is appropriate. But…

I’m not an engineer, I’m an environmental scientist, and an economist. When I see a scenario in which life on our planet is faced with extinction my immediate thought is, “How can we fix this?”, not “Let’s go live on the Moon”. The environmentalist in me thinks that it can be fixed, and the economist knows that any extra-terrestrial colonies will provide sanctuary only for the wealthy few, not the vast mass of humanity.

Obviously the point of the novel is to showcase Elma’s battle against misogyny, and to a lesser extent against antisemitism and racism. But in doing so it fixates almost entirely on the space programme and largely ignores debates that must be happening in world politics over whether this is the right thing for humanity to be pouring all our resources into. I know that the sequel is already out, and that Mary Robinette read from book 3 in London recently. I’ll be getting the sequels because this one was good, but I very much hope that they take a look at the wider issues. 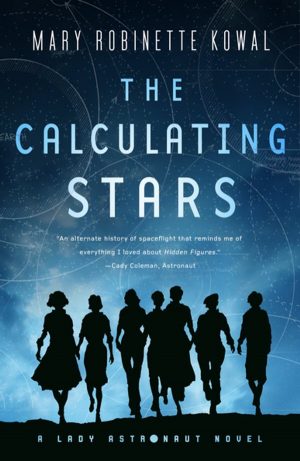