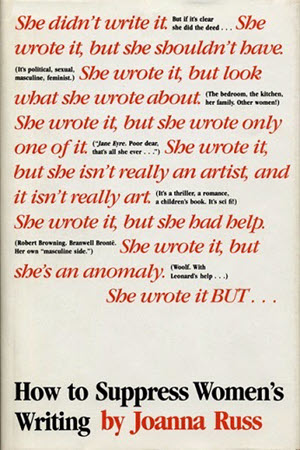 Because I’m a bit mad, I managed to attend two conventions in the same weekend. One was SMOFCon #38 in Montréal. The other was When It Changed, which was organized by the Centre for Fantasy and the Fantastic at the University of Glasgow, but took place online. This was an academic conference inspired by the 50th anniversary of the publication of Joanna Russ’s legendary short story, “When It Changed.” The folks at Glasgow took this as an opportunity to look at the current state of feminist science fiction and see whether, in fact, anything has changed.

I was fortunate enough to be asked to give one of the keynote addresses, and I am extremely grateful to the organisers for rescheduling my talk at the last minute to allow me to give it from my hotel room in Montréal without having to be up at 3:00am.

The other two keynotes were from Lisa Yasek, one of the best known chroniclers of women in science fiction and fantasy, and Joy Sanchez-Taylor who brought an important non-white perspective to the discussions. Both of their talks were great. Mine was, well, mine, but I note that I built heavily on my 2020 essay for Vector, and on the talks that Farah Mendlesohn gave at ICFA and Eastercon in 2022.

While I tried to listen to as many papers as I could, quite a few were too early in the morning, and I did have paid work to do, so I managed to miss rather a lot. I do remember particularly enjoying the two papers on the novel, Autonomous, by Analee Newitz.

I suppose it was inevitable, given the overturning of Row v Wade in the USA, and the subsequent growth of anti-abortion movements elsewhere in the Western world, that there would be a significant focus on reproductive biology at the conference. I am slightly worried that this will provide a breach whereby gender essentialism can infiltrate feminist SF scholarship. I hope not, but we do need to be vigilant.

There is an excellent overview of the convention, written by Emma French, on the Centre’s website. It includes links to all three keynotes if you are interested in hearing what Lisa, Joy and I said.

I have a couple of other minor points to make. The first is that avowedly intersectional cis women feminists still can’t always see transphobia when it is paraded in front of them. (It was only one paper, but even so…) The other is that I’m very serious about the danger that writing, especially of fiction, is becoming “women’s work” and is being devalued as a result.

My thanks again to all of the organisers. It was great to see so many smart and passionate young feminist scholars giving papers, and an absolute honour to be asked to give a keynote.