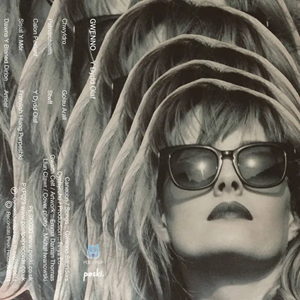 Now that I’m resident in Wales and able to engage more with the local culture, you can expect me to be writing about that. Welsh people do write science fiction (Al Reynolds, Jo Walton and Jan Morris, for example). We also write about it. Thanks to Dave Langford, Welsh people may have more Hugos per head of population than any other country. Perhaps less well known is that science fiction gets written in Welsh.

That, however, is not quite what this review is about. Y Dydd Olaf (The Last Day) is the title of what is generally regarded as the finest Welsh language science fiction novel. It was written by Owain Owain, who was a key figure in the Welsh Language Society back in the 1960s. Owain was a nuclear scientist at Windscale so he was very much in the mould of SF writers of those days. The book is apparently about a robot rebellion. It is only available in Welsh, and my reading comprehension isn’t yet good enough to tackle it.

There is, however, a concept album. Gwenno Saunders, known professional just as Gwenno, is a leading member of the Welsh indie music scene. Although she was born in Cardiff and has a Welsh mother, her father is Cornish and writes poetry in that language. So Gwenno is someone who grew up steeped in Brittonic languages.

The album, Y Dydd Olaf, is mostly in Welsh, with one song in Cornish. It won Best Welsh Album at the National Eisteddfod in 2015. The lyrics probably won’t mean any more to you than the book, but that doesn’t matter because the music is wonderful.

Gwenno’s music is generally described as electropop. So if you like the music of Kraftwerk, or Gary Numan, or Ladytron, to name but a few, you are probably going to love Gwenno. The fact that the lyrics are in a language you can’t understand will be entirely irrelevant to your enjoyment of the music. And of course this is an ideal music genre for science fiction. Gwenno’s ethereal voice floating over the synthesizer tones combine beautifully to give an otherworldly feel to the sound.

Gwenno’s more recent output has been in Cornish (they need help more than we do to keep their language alive). Her third album, Tresor, was a Mercury Prize finalist this year. The lyrics are strongly feminist, and I note that she counts Monica Sjöö among the inspirations for it. I hope that Janelle Monáe knows.