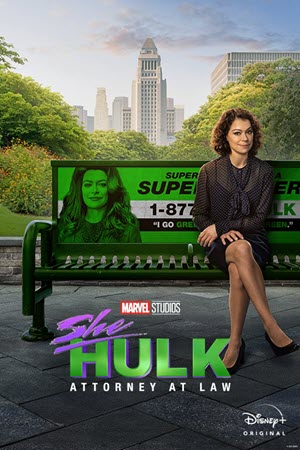 Well, that was different. She-Hulk: Attorney at Law is about as off-the-wall as the Marvel Cinematic Universe is likely to get. And yes, that does mean it is more weird than anything the various Asgardians or Deadpool have done.

Does that mean it is good? It depends who you ask. Greg Wheeler at The Review Geek says that she show “fails on almost every conceivable level.” Meanwhile at Tom’s Guide Henry T Casey says that the show is “shockingly good.” That’s a marmite show alright.

It doesn’t help that the show has been massively review-bombed by the sexist Dudebros. Apparently they hated it even more than they hated Ms Marvel, which is saying something. But that doesn’t account for everything.

Of course it doesn’t help either that the show is set in Los Angeles. All those weird, obsessive people? Yep, those are Angelenos. It is another world, really. Where all the stars that never were are parking cars and pumping gas.

Some of the more cogent reviews have come from Stewart Hotston at Sci Fi Bulletin. I think he’s reviewed each episode, so I won’t link to every one. The thing that stood out for me is that he pointed out how un-feminist the show was. Here we have a supposed hot shot lady lawyer who is also a superhero, and yet she’s portrayed as a neuroses-filled klutz.

She-Hulk is comedy. That’s fair enough. But it gets many of its laughs from the fact that Jennifer Walters is a complete idiot. Mallory Book is a much better lawyer. Heck, Nikki is probably a better lawyer. Many of the rest of the laughs come from Jen’s disaster of a love life. The show gets into almost Clan of the Cave Bear levels of “who will Jen shag next?” anticipation.

And yet, a bunch of smart women I know enjoyed the series. I enjoyed a lot of it. What gives?

It took me a while to figure it out, but during the season finale I think I finally twigged what the show was all about. If you’ve seen WandaVision you’ll know that people at Marvel have a bit of a thing for old TV shows. What I think She-Hulk was meant to be was a modern version of The Mary Tyler Moore Show. I haven’t seen an episode in a very long time, but I do remember Moore’s character having a penchant for disaster.

Now that show was a beacon of feminist propaganda in a time when women had far fewer rights that we do now. It did that in part by showing Mary as the sort of klutz that men expected a working woman to be, and yet at the same time showing her as good-hearted, hard-working, badly-treated, and much smarter than she allows herself to be because she’s trying to fit into a social role that doesn’t allow her to succeed.

In other words, we enjoyed She-Hulk, not because Jen was a fantastically competent super-woman. We have Carol Danvers for that. We enjoyed She-Hulk because we see Jen Walters making all of the same stupid mistakes that we have made along the way, and still somehow having the chutzpah to come through in the end.

Also I’m a sucker for anything that takes a wrecking ball to the Fourth Wall and has a go at the banality of TV series plots.