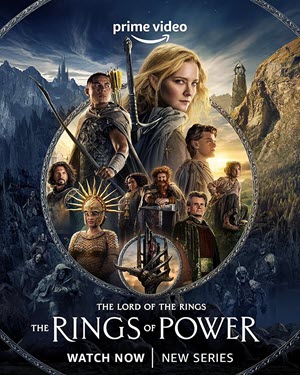 There will, I am sure, be many erudite reviews written about the relationship between Rings of Power and Tolkien’s Legendarium. This is not one of those reviews. I leave that sort of thing to the likes of Dmitra Fimi. I’m just going to review the show from the point of view of someone who was bored rigid by The Silmarillion and has a love-hate relationship with Peter Jackson’s movies.

Mostly I did love the first three films, though the ending was way too long and there were some very silly things in it, such as the cavalry charge down a scree-covered slope. I have a similar relationship with Rings of Power. It does epic fantasy quite well. The final episode hit most of the right notes. And there are some very silly things in it too. (How did they fit all those men and horses into three tiny ships? And don’t get me started on the volcano nonsense.)

The big problem that the script writers had to face is that The Silmarillion is not a novel, it is a sketchy mythic history that has more in common with the Anglo-Saxon Chronicle than with Beowulf. It is not peopled by real people with real motivations. A TV series needs those things.

This is why we get a bunch of new characters. Who were the people who lived in the Southlands before Sauron turned the region into Mordor? Why did the Númenóreans make the fatal choices that led to their destruction? What sort of person was Isildur, of whom we hear so much but know so little?

A classic example is the introduction of Eärien, Isildur’s sister. She’s there to provide a human focus for the Númenórean political debate. It is necessary to do proper story-telling. And mostly that has been done without being too heavy-handed about it.

Social media, of course, is full of right-wing idiots claiming that Tolkien would have been furious about the casting of actors of colour as elves and dwarves. This is all performative hot air and not worth spending any time on. If Tolkien is spinning in his grave it will be over something very different, and much closer to his heart: language. The naming of the Southlander characters is all over the place.

We have a woman called Bronwyn, who has a son called Theo. Really? Is there any linguistic consistency to that? Of course the script-writers will have had their reasons. Theo, pretty obviously, is going to grow up to found Rohan. Their future kings are all named after him. As for Bronwyn, well maybe they felt guilty. The elves are obviously upper-class English. The dwarves are Scottish and the harfoots are Irish. The humans are lower-class English. Where are the Welsh in all this?

Of course Morfydd Clark, who plays Galadriel, is Welsh. Never get in the way of a Welsh girl with a sword. It will not end well for you.

All-in-all I was fairly pleased with Season 1. It doesn’t have the narrative coherence and consistency of Sandman, because it is very far from being the brainchild of a single person. But for a series written by a committee that had to spend their entire time looking over their shoulders for the angry ghost of an aged, pipe-smoking professor, they did pretty well.