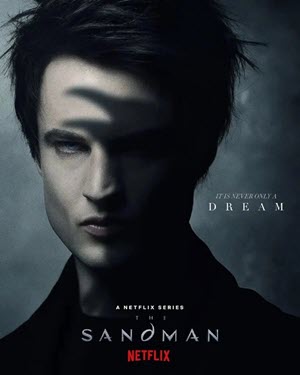 It is entirely impossible for me to be in any way objective about this series. There is a variety of reasons for this, including, of course, that there is no such thing as an objective review.

To start with, Neil Gaiman and I have been friends for almost four decades. That’s a big chunk out of anyone’s life. We did briefly lose touch when he went to America to write comics and I went to Australia to become me. But it was a story in Sandman that gave me the confidence to make contact again when Neil was due to be a Guest of Honour at Swancon in Perth one year. A Game of You comes in for a lot of flak these days (of which more later), but it was obvious to me reading it that Neil understood the problems that trans people face in life, and was on our side.

That, however, is not all. The staff writers on the show include on Catherine S. McMullen. She was also the lead writer on episode #11, which collected “Dream of a Thousand Cats” and “Calliope”. Catherine’s father is the Australian author, Sean McMullen. He and I have been friends for around 25 years and I will be publishing one of his books later this year. I have known Catherine since she was 9 years old, and it was obvious even then that she was destined for stardom in one field or another. It was only a matter of which mountain she decided to conquer. As it turned out, she has become a successful screenwriter with an International Emmy to her name. I am so very proud of her.

So The Sandman is, to me, very personal. And that is despite the fact that I am not a big fan of horror.

Having said all that, I am very pleased with the way things have turned out. Some of the casting has been brilliant. I particularly enjoyed Kirby Howell-Baptiste as Death, Mason Alexander Park as Desire, Jenna Coleman as Johanna Constantine and Stephen Fry as Fiddler’s Green, all of whom seemed born to the roles. Lots of other people have done great jobs too.

More importantly, I am impressed with what has been done with the scripts. The Sandman comics were never going to be easy to adapt to the screen, because of the very nature of comics. When Neil first started writing them he had to earn the trust of his editors at DC, and one way to do that was to link the series into the existing DC universe. The TV version has no trace of characters such as John Jonzz who made guest appearances in early issues of the comic (though I would not have been averse to seeing David Harewood in the role, especially if the rest of the Supergirl crew came along too).

Another issue with comics is that the schedule is punishing, for both author and artist. Consequently we have filler issues which have been prepared in advance to keep the schedule going if one or the other can’t deliver on time. “Dream of a Thousand Cats” is one such filler, but it is also many people’s favourite Sandman story. A lot of people assumed that we would not see it on screen because it was a filler, not part of the main story arc.

When thinking about Hollywood scripts my mind always goes back to the scene in The Matrix Resurrections where the script committee is working on the new version of the game. Lana Wachowski was having a very pointed dig at (amongst other things) the way that creativity gets sidelined in favour of demands from marketing to cater to various different segments of the audience. You can tell when a film or TV series has been written by a committee (hello Rings of Power). The Sandman still feels like it has a creative vision. Achieving that will not have been easy, and it required Neil to have a lot of control over the final product.

Had the TV series been done by anyone else, the script team would have thrown away most of the comics and written a new story, featuring the main characters, that had a simple and consistent story arc. Neil chose not to do that, but instead to re-worked the comic scripts to make a simpler story, and to put out some of the filler issues as a bonus episode (hence #11). It was a brave thing to do, and some reviews have complained that the narrative is a bit of a mess as a result, but it has kept faith with the original fans of the series.

The other thing Neil has done is take the opportunity to update parts of the story for a modern audience. A lot has changed since 1988 when the first issue was published (with a cover date of January 1989). Much hot air has been generated over the gender swaps and people of colour used in the cast, but at least as much hot air, possibly a lot more, would have been generated had Neil stuck to the original characters. Just as importantly, I’m sure he is pleased with what has been done, because people grow and learn with time.

Not that this has prevented people from complaining that the TV series is bi-phobic and racist, but that’s the Internet for you.

Talking of which, Morpheus has a story arc. He is a bit of a bastard when he first escapes from captivity, but he grows and learns too. I’m a bit disappointed with the people who expected him to be a hero from the get go.

Constantine is a bastard too. The constant tussle between being utterly selfish and having a good heart is the charm of the character.

All of which brings us to the question of A Game of You. As of now, we do not know if Netflix will be renewing the series for a second season. Season 1 has been a huge success in comparison to almost everything else Netflix has done, but it was also very expensive, and the company accountants were expecting a lot of revenue to balance that. Personally I think it would be foolish of them to cancel such a much-loved series, but I’m not a bean counter at heart.

Assuming we do get a second season, there is the question of what will be in it. Season 1 is mostly taken from Preludes and Nocturnes and The Doll’s House, plus the first half of Dream Country. We can therefore reasonably expect Season 2 to include the rest of Dream Country, Season of Mists, and A Game of You. We have already met Will Shakespeare, who features in Dream Country; Nada, who has a major role in Season of Mists; plus Barbie and Martin Tenbones from A Game of You.

Given how material in Season 1 was updated for a modern audience, I am expecting Neil to make some changes to A Game of You to make his support for the trans community more clear. One of the things that annoyed him about the original comic was that the artist who first drew Wanda (Shawn McManus) portrayed her as very mannish, as opposed to the more glamourous character that Neil had requested. As is the way of things, Neil got the blame for this.

For the audio version of the stories, Neil gave the role of Wanda to Reece Lyons who is a well-known trans actress. It is possible that she’ll get the TV job, but I suspect that Jamie Clayton and Nicole Maines would both love to get it too. Or we could end up with someone new. Regardless, I am looking forward to seeing what is done with the story, and hopefully that will put an end to Roz Kaveney and I having to constantly defend Neil against accusations of transphobia.