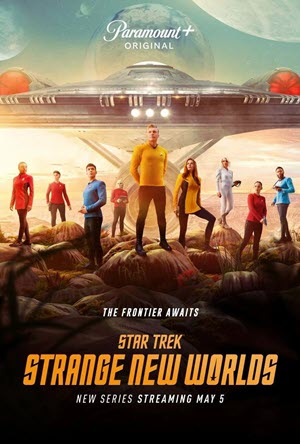 I am finding myself fascinated by the way in which the Star Trek franchise is developing. There have been several attempts to do a “past times” series. I haven’t seen Enterprise, but by most reports it seems to have been a bit of a disaster. Discovery also tried to fit into that pre-Kirk slot, and very nearly blew the whole thing up. Thankfully the series has now successfully re-invented itself as far-future Star Trek.

Strange New Worlds, then, is a third attempt to fit into that past-Trek slot, and I think this time they have got it right. As you probably know, the series focuses on the life of the Enterprise in the years before Jim Kirk took the helm. Christopher Pike is the captain. He does feature briefly in The Original Series, and we know that he and Spock were good friends. There is material to work with here.

What the show-runners have done with Strange New Worlds is to make it feel as much like original Trek as possible. That means that there isn’t much of an overall story arc, and individual episodes can feel very different. There’s one that shows the script-writers are fans of Le Guin. There’s one that’s a screwball comedy involving Spock and his girlfriend accidentally swapping bodies. There’s one that is an Alien-type horror story. There’s an awesome space pirate (played by trans actor, Jesse James Keitel) whom I hope will be a recurring antagonist. And there is a totally off-the-wall episode in which the crew gets to play out roles in a children’s fairy story (and in which Erica Ortegas sets a thousand lesbian hearts a-flutter).

Another way in which the series reflects TOS is that the key roles mostly hark back to people we are familiar with. Discovery doesn’t do that so much. Major supporting characters are people like Book, Admiral Vance and President Rillak, who are not members of the crew. Neither Saru nor Philippa Georgiou has a clear analog in TOS. Sick Bay and Engineering are all about queer family in a way that McCoy and Scott could never have been. But in Strange New Worlds the stories are all about the crew. We have Erica Oregas doing a lot of recognisable Chekov and Sulu things. We have Dr. M’Benga channeling McCoy. It feels familiar.

Of course some of the characters are the same as those in TOS. Ethan Peck has so successfully inhabited the character of Spock that I now get a bit of a shock seeing Leonard Nimoy in the role. Celia Rose Gooding is a very expressive young Uhura. I’m wondering what happened to her between now and Kirk taking command that caused her to become so adult and restrained. And then there is Jess Bush, who is not much like the original Christine Chapel but is such a delight that I don’t care.

All of this comes to a head in the series finale, where the scriptwriters try their hand at the delicate task of melding together the two timelines. In the story, Captain Pike, who knows what a horrible fate lies in store for him, gets to go forward in time to learn why he must not try to change the future. The episode is essentially a re-run of the TOS story, “Balance of Terror”. Many of the scenes, and even lines, echo the original story. Pike plays the situation very differently from Kirk, and a disastrous war with the Romulans ensues.

There is certainly a debate to be had about that, because Kirk’s actions in the original story are against Star Fleet orders and can be seen as unreasonably violent. Certainly Pike thinks so. But that’s a question for another day. What concerns me is that something that could have been a complete disaster actually works quite well. I did go back and watch the original episode to check.

The downside of that episode is that Paul Wesley as Kirk is unconvincing. Maybe he’ll grow into the role.

To wrap up I want to go back to episode 3 in which Una Chin-Riley, “Number 1” and Pike’s second in command, is revealed to be an Illyrian. I had to go and look up some wikis to find out what that was all about. They are a race of aliens who major in biology rather than physics, and they make extensive use of genetic engineering. Because of this (though the arguments are not laid out) they are barred from joining the Federation. Some of them, like Una, have used their science to make themselves look human, and live in Federation space. If caught, they can be imprisoned for impersonation.

Obviously this is playing into the same “they walk among us” trope that gets deployed against trans people. I am very interested to see where Strange New Worlds takes this.