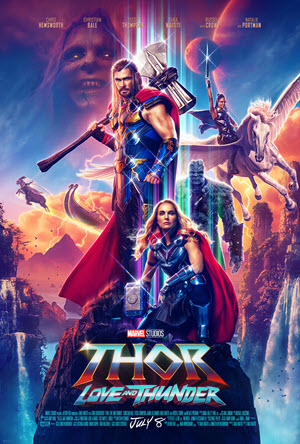 While movie theatres might still be a bit scary, no way was I going to miss this one. I managed to find a screening with only a dozen or so other people attending and settled down to enjoy some nonsense.

The film introduces a new villain, Gorr the God Butcher, brilliantly played by Christian Bale. For very good reasons, Gorr has declared war on all gods. Fortunately for him, he is in possession of something called an necrosword, which is capable of killing gods. He embarks on a campaign of deicide, and Asgard is soon in his sights. (Hela created the necroswords, so it is their own fault, sort of.)

So Thor bids a fond farewell to the Guardians of the Galaxy and heads home to help out Valkyrie. There he discovers that Mjölnir has got itself back together and taken up with Jane Foster, who is now The Mighty Thor. This is rather too much for Thor’s admittedly small brain. To make matters worse, his excitement at seeing Mjölnir re-forged upsets his new ace, Stormbreaker. So he has a whole weapon jealously issue to contend with.

Meanwhile Jane and Valkyrie are doing their best to sort out the problem and point Thor in the direction of Things That Need Hitting. Gorr pulls a dirty trick by kidnapping a bunch of Asgardian children, including Heimdall’s son. The lad has adapted to life on Earth and has taken the name Axl after his favorite rock star.

It is not an accident that the theme song to this film is “Sweet Child of Mine” by Guns N’ Roses. This is a film that is very much about children.

Thanks to Axl having inherited some of his father’s powers, our heroes are able to keep tabs on Gorr. They discover that he plans to murder the being known as Eternity, and thus destroy the entire universe (or maybe multiverse, who knows?).

The Asgardians decide that their best bet is to seek help from other gods. So they head off to a place called Omnipotence City, where all other Earthly gods except themselves live. It is ruled over by Zeus, played by a rather podgy Russell Crowe with a terrible faux Mediterranean accent. Things do not go well, and our heroes end up having to confront Gorr by themselves.

That’s enough spoilers. I will simply note that the film manages to be both very funny, and be a great superhero action movie, and a great love story, all in the same two and a bit hours. I was well impressed. And while I know very little about making movies, I did think that the scenes shot mainly in black and white worked really well.

Along the way there is plenty of queer content, though Valkyrie still doesn’t have a girlfriend. The Olympians are particularly queer, and the film introduces Hercules who is canonically gay in the comics.

I note, by the way, that Valkyrie is King of Asgard. Not queen, king. Because King is a title, not a gendered word for ruler. In this Marvel are following good ancient traditions. I don’t know much about the Norse, but certainly among the Egyptians the ruler was King, and later Pharoah, regardless of what gender they were.

The next movie in this sequence will be Thor v Hercules. I’m looking forward to it already.

But yes, like the Doctor Strange film, this was a film where the safety of children is a major plot theme. That’s an interesting development, given that the two films will have been made largely in isolation. And, like the Doctor Strange, Thor has to deal with issues involving his first love. In the early comics Jane disappears from the scene and Thor takes up with Sif. That’s not going to happen in the MCU, and presumably it has all changed in the comics now as well. Natalie Portman seems to have a whale of a time playing Thor. I hope we get to see her again.