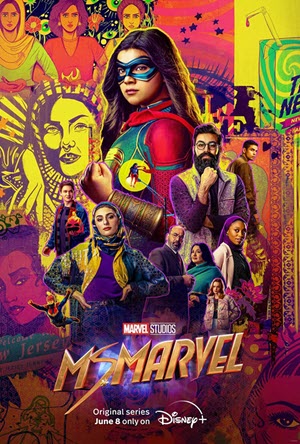 Well that was absolutely delightful.

Of course a whole lot of people are going to be complaining that Marvel has “gone woke”, but actually much about Ms Marvel is very traditional. I shall try to explain.

The obvious thing is that Kamala Khan is neither white nor male. She is a Pakistani-American Muslim teenager from New Jersey. Like many teenagers in the MCU, she is obsessed with superheroes (see also Kate Bishop), and in particular she is obsessed with Carol Danvers. Naturally her parents don’t approve, but this being the 21st Century they are not the sort of parents that teenage superheroes had when I was a teenager. Kamala’s mother, Muneeba, is still a massive Bon Jovi fan, and one of my favourite parts of the series was seeing a photo of Muneeba as a teenager in the 1980s. Very reminiscent of Allanah Currie.

So this is a show about Muslim life in America. Kamala and her family attend the local mosque. The Iman gets one of the best lines in the show: “Good is not something you are, Kamala, it is something you do.” Kamala’s best friend, Nakia, wears a hijab and runs for the mosque council to stand up for women’s rights. It is also about Pakistan. Several episodes take place in Karachi, and the Partition of India is central to the plot.

But it is also a very Marvel show about a high school superhero. In addition to Kamala and Nakia we have Bruno, a geeky boy who has a crush on Kamala. We have Zoe, the most popular girl in school who is a well known social media star. So it is updated for today, but in some ways reminds us very much of another teenage superhero.

Like Spiderman, Ms Marvel has to learn to use her powers. And like Spiderman she is heavily embedded in her local community. They just happen to be a mostly Muslim community. A key moment in the series shows the community stand up for her against government agents. It was somewhat weird that the NYPD stood with the local community, rather than shooting them, but there are limits to how rebellious Marvel scriptwriters can be.

Ms Marvel is, of course, a heavily female-driven show. Kamala’s relationships with her mother, her grandmother, the Aunties in the local community, and with Nakia and Zoe, are all key to the story. There is a love triangle of sorts, but it is a show about teenagers so that’s fairly inevitable.

What really makes the show, however, is Iman Vellani. She’s bubbling with personality and does a superb job in the role. I’d say she’s only 20, but then Xochitl Gomez is only 16 and does a similarly impressive job as America Chavez. The Young Avengers team is going to be seriously impressive.

Anyway, I love it. I very much want to see more. Apparently I’ll have to wait for next year and the new Carol Danvers movie. Thankfully there’s a whole lot more Marvel content to come before then.