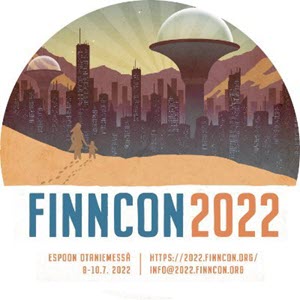 It has been a long time in coming, but Finncon is back in person again. The last in-person event was 2019 in Jyväskylä (where I was a Guest of Honour). We’ve all missed it. So how is the convention shaping up to the post-lockdown era?

The most notable thing about Finncon 2022 is that it had a new venue. Previously Finncon has rotated between the major cities of Helsinki, Tampere, Turku and Jyväskylä. This year it was in Espoo. ‘Where is Espoo?’ I hear you ask. Well it is right next door to Helsinki. Espoo is to Helsinki kind of like Reading is to London, or San José is to San Francisco. That is, it is a large city, next door to a much more famous one, and noted for being a technological powerhouse. Espoo is home to Nokia, to Fortum, the Finnish national energy company, and to Rovio, the Angry Birds people.

In addition, Espoo is home to Aalto University. They too are proud of their leadership in technology. The campus is home to the Technical Research Centre of Finland and to various start-ups. Unlike the University of Helsinki, whose campus is embedded in the city much like London’s colleges, Aalto has a brand new campus and excellent public transit connections. There is a Metro station at the campus, and a brand new light rail line is being built to connect there too.

(Note to rail geeks, especially those whose have been to Helsinki. I used the term “light rail” deliberately. This is not an extension to the Helsinki tram system, it is a new system with longer and heavier vehicles.)

University campuses work well for Finncon because they are available at a reasonable price and all of their rooms have good tech. So a well-connected and affordable site with well-equipped rooms should be a good choice. The con was run by some of the same people who usually run Helsinki Finncons and I suspect that the Espoo location works better for them. Mostly it did work.

The layout was a little confusing, but the signage was good and I soon found my way around. The building they were using had plenty of open space in addition to the lecture rooms, and this was usefully filled with many dealer tables. One of the main rooms had a tech failure part way through the con, but we hadn’t booked them all and we were able to switch to a different, similarly-sized, room.

If I have a complaint, it was about the acoustics. Although everyone got a microphone, if people didn’t use it properly (i.e. almost eating it) then people at the back of the lecture theatres could not hear well. I ended up sitting right down the front. This is odd, because the university is named after, and the campus designed by, Alvar Aalto, Finland’s most famous architect. He is also responsible for the Finlandia concert hall in Helsinki, so he ought to know about acoustics. Then again, that building is once again under renovation because the white marble that Aalto insisted on using to face it cannot stand up to the Finnish winter.

This being a university campus, there is plenty of cheap food nearby. That includes an instance of a chain of all-you-can-eat sushi buffet restaurants. I would have quite happily have eaten there every day. There is also a very good place called Fat Lizard which does burgers and pizzas, and has excellent beer, much of which they make themselves. Sadly they were way too busy, and we ended up eating at a place called Old Jerusalem, a restaurant specialising in Levantine cuisines, and which also does great pizza.

When I say “we” I primarily mean Otto, Paula and Irma, though for the sushi place we were joined by a whole bunch of other people, including Regina Wang who has finally managed to escape lockdown in Shanghai and is now back at university in Oslo where she’s doing a PhD.

The overseas guest this year was Malka Older, whom I’ll talk about more in my review of Infomocracy. She’s a very interesting person and I really enjoyed the panels she did. I was on two panels. One was about the “Kill your gays” trope in fiction, and what is happing with queer SF&F today. It was very well attended, and seemed to go well. My thanks to Sara Norja, Xan van Rooyen who are always great to work with. The other was “Should I travel abroad to conventions?” where I was joined by Marianna Leikomaa, Tero Ykspetäjä and Carolina Gomez Lagerlöf. I think you can guess how this went. In particular we recommended next year’s Eurocon in Uppsala, Sweden, and the 2024 Worldcon which everyone expects will be in Glasgow.

Talking of Uppsala, it is really easy to get to, and one of the Guests of Honour is Martha Wells of Murderbot fame. Gotta be worth looking into, right? I’ll be there.

Another of the GoH choices for Uppsala is Merja Polvinen who has done a fantastic job steering the Finfar academic network. There was also an excellent academic track at Finncon. I didn’t get to see much of it because I was busy elsewhere, but I did catch a few panels. I’m keen to get hold of a copy of the anthology of stories by Chinese women writers that Regina has edited (it is called The Way Spring Arrives). I was also pleased to catch up with Paul Graham Raven who is currently working at a university in Sweden.

Still with GoHs, the Fan Guest of Honour at Finncon this year was Marianna ‘Kisu’ Leikomaa. Given the amount of work she has done for Finncon over the years, this was very well deserved. One of many things she does is help run masquerades, and I was happy to be asked to help judge again this year. Kisu is also usually responsible for writing the filks in honour of the GoHs that traditionally get performed at the Saturday night party. Clearly she couldn’t do that this year. I gather that at least three people wrote something just in case it was needed. Sadly we only got to hear one.

Finncon 2023 will be in Tampere. There are no dates or GoHs as yet, but that will doubtless follow once the Finns are all back from their summer break. I plan to be there.

And I have one final comment about Espoo. In keeping with the city’s image as the tech capital of Finland, it is home to a company that provides robot pizza deliverators. Well not quite, Hiro Protagonist isn’t out of a job yet, because Starship Technologies doesn’t trust their robots to deliver cooked meals on time. The poor little things are very nervous around traffic. But they do deliver groceries and they are very cute. The company is apparently Estonian. Good luck to them.