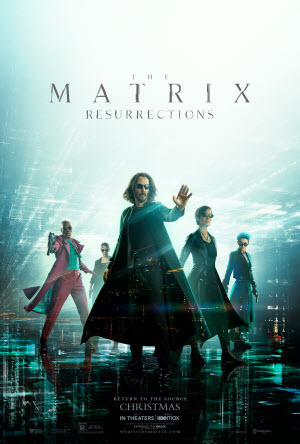 The fourth Matrix film was apparently a disaster at the box office, and received a thorough panning from many critics. As a result it took me a while to get around to watching it, but I’m glad I did because there’s a lot to think about.

To start with there’s the question of Lana Wachowski’s motive for making the film. Her official position is that she changed her mind after her parents died. The Matrix Resurrections is a love story about two somewhat elderly people, so I think we have to take her at her word there.

Also it is true that Warner Bros. were keen to get a sequel, and indeed had hired someone else to write a screenplay. So Lana took it upon herself to give them one, and in way they probably didn’t want.

Those of you who have seen it will know that the first half of the film is an extended meta joke about the fact that the film is a Matrix sequel. Neo and Trinity are back in the Matrix. Neo is once again Thomas Anderson, who is now a successful game developer. His top-selling trilogy of Matrix video games has made a lot of money for him and his company, Deus Machina (the god machine, a.k.a. The Matrix, obviously). His business partner, and CEO of the company, is Agent Smith. This kind of makes them Woz and Jobs, which is a very Bay Area joke.

The plot gets underway when Smith reveals to Anderson that their parent company, Warner Bros., has demanded that they make a fourth Matrix game. This is followed by a whole lot of poking fun at the corporate art production process. Christina Ricci provides an absolutely brilliant cameo as a corporate marketing executive. Lana also has the creative team debate what the original trilogy was “really” about, because of course nothing she does is only about one thing.

Meanwhile, in the real world, many decades have passed. Zion is no more, but a new enclave called Io, ruled over by the elderly Niobe, has arisen. Many of the inhabitants are fans of Neo and Trinity. One particular group of them, led by Bugs (another white rabbit reference) discovers clues in The Matrix that lead them to Anderson, and they decide to mount a rescue. Jessica Henwick is brilliant as Bugs, and it is lovely to see Brian J Smith and Max Riemelt playing characters from Io.

Most of the rest of the movie is the sort of relentless action you expect from a Matrix movie, with plenty of kung fu and associated fighting styles. Once Neo is rescued they need to rescue Trinity too, and then everyone can live happily ever after.

I’m not in the least bit surprised that the dudebros who wanted another Matrix movie are not happy with something that essentially makes fun of people who wanted another Matrix movie. I don’t suppose that Warner Bros. are happy either, but maybe they will have learned their lesson. I think it is also inevitable that the new movie is not as revolutionary in its look and special effects as the first one. But this is a Matrix movie, just not the one people thought they were getting.

To start with there are plenty of callbacks to the original trilogy. Wachowski and her writing team (which includes David Mitchell) have clearly thought about how the world of the movies would have developed. One particular thing I really liked is that Tiffany’s husband in The Matrix is played by the guy who was Keanu Reeves’ stunt double in the original trilogy. So he is, in a sense, a fake Neo.

Other things are different, most importantly an emphasis on deconstructing binaries. Machines and humans live alongside each other in Io. Software constructs such as Morpheus have a means of manifesting in the real world. Anderson is working on a new computer game called Binary, which he seems unable to finish. Agent Smith and Neo are allies at times. All of this is trans-related, because the acceptance of non-binary people is the one thing that has changed dramatically since the original trilogy.

Another significant change is the main bad guy. In the original trilogy we had the Architect who built the Matrix. The new Matrix is built by someone called The Analyst (brilliantly played by Neil Patrick Harris). Obviously an analyst is a term for someone who works in software, but we first meet The Analyst in his role as Anderson’s therapist. He is a psychoanalyst. And the new Matrix he has built is based around programming human emotions.

In particular, the new Matrix works by filling the inhabitants with a sense of wanting things they can’t get. The key to this is that Neo and Trinity are in pods very close to each other, but they can never be together. This is the emotional core of the Matrix, and of the film. When Neo and Trinity are re-united in the real world, the Analyst’s Matrix falls apart. The way to destroy The Matrix is for us to care about each other and get together.

This is fairly obviously a comment on consumer society, which works by continually encouraging people to want things they do not have. Including, of course, a new Matrix movie. It may also be about politics, which these days is very much about crafting emotional narratives rather than about explaining policy.

The other major change in the films between this trilogy and this one is the way it is made, which you will only know if you have watched the extras on the disc. When they did the original trilogy, Lana and Lily were control freaks. Everything was planned down to the smallest detail. Almost nothing was shot outside of the studio, because you could never know what the sun was likely to do.

Lana’s approach to the new movie was very much seat-of-the-pants. There was no storyboarding, no pre-vis. Lana would direct as she went along, often looking over the cameraman’s shoulder to tell him what to do. The cast, if disc extras can be believed, enjoyed this, because the continual cut and re-do in search of a shot that perfectly reproduces what was planned is annoying and tiring. Also many key shots make glorious use of the sun, which is lovely.

That the film achieved the final, climactic sequences in this way is really quite remarkable. There were actual helicopter gunships flying through San Francisco, and actual cars blowing up in the streets below, all being shot in a single take. The final shot of Neo and Trinity jumping off a 43-storey sky scraper is exactly that. There’s no green screen, no stunt people, just Keanu Reeves and Carrie-Anne Moss jumping off a stupidly high building. In a harness, obviously, but still real.

There could be many reasons why Lana Wachowski’s film-making style has changed so radically. Maybe she is just massively more experienced. Maybe she’s just older and richer and doesn’t have to care about what others say. But I also wonder whether it has something to do with the fact that she and Lily made the original series while they were still closeted, and now they are free to be themselves. I can’t speak for anyone else, but I know I used to be a massive control freak prior to transition, and I’m much more relaxed about life now.

To wrap up I want to talk briefly about Trinity’s role in the movie. Mostly it looks like she’s there to be rescued. But specifically she’s being rescued from life as a traditional wife and mother. Also Neo says that he never believed that he was The One. He succeeded in what he did because Trinity believed in him. And now it is his turn to believe in her.

When the pair of the them jump of the sky scraper, it is Trinity who first gains the ability to fly. She has the last word in the film. Perhaps now she is The One. Or maybe we all are. All we need to gain power over The Matrix is to be loved.