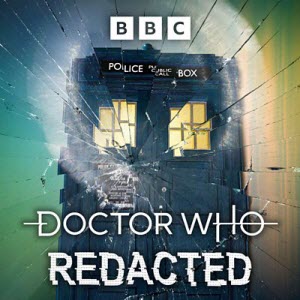 I’m not a big fan of audio drama. I tend to have difficulty in following what is going on. I’m also not a huge fan of Doctor Who. In particular I found the Moffat era unwatchable. But my Twitter feed has been full of excitement over a Doctor Who audio drama with a lot of queer content, so I figured I should give it is a try. Folks, it is very good. It is also guaranteed to get up the noses of the Dudebros. This is excellent.

Doctor Who: Redacted is a an official BBC production (and therefore presumably canon, whatever that means as far as the show is concerned these days considering that much of it has been ripped up of late). The lead writer is Juno Dawson (a trans woman), and the star is Charlie Craggs (a trans woman) who plays Cleo Proctor (a trans woman). The director and main supporting cast are all queer women. If I had to design a show that would be the queerest thing ever, I don’t think I could do much better than this.

The show comes as ten episodes of varying lengths from 20 to 30 minutes, making up a full story arc, with suitably cliff hanger endings. There are guest appearances by well known Doctor Who characters, including The Doctor herself, Kate Stewart, Petronella Osgood, Rani Chandra and, of course, Madame Vastra, plus a few minor characters from the specific shows the series riffs off. Not all of these characters are played by the same people that played them in the TV series, but Jodie Whittaker does play The Doctor.

I can’t say too much about the plot because that would spoil the mystery of it, but I can say that it centers around a podcast. Cleo and her young friends, Abby McPhail and Shawna Thompson, host a series called The Blue Box Files. Their show focuses on conspiracy theories associated with the mysterious appearance (and disappearance) of an old-fashioned blue police call box and a person known as The Doctor. As a result of their researches, the three girls probably know more about The Doctor than anyone outside of UNIT.

Meanwhile, something strange is happening on Earth. Anything and anyone associated with The Doctor is disappearing. Computer files get corrupted. Artefacts go missing. People lose their memories of events. Sometimes actual people vanish, and no one can remember them.

Alongside the adventure plot we have personal issues. Cleo’s mother has been unable to come to terms with her gender transition and threw her out after Cleo’s father disappeared in mysterious circumstances. Cleo now lives with her brother, Jordan. Shawna is madly in love with Abby, but won’t admit to it, though she does spend a lot of time being rude about Abby’s boyfriend, Craig. Mostly Craig deserves it.

That’s plenty of plot to drive a 10-episode series. Slowly but surely the girls will discover that the Blue Box is real, that some scary military people are also interested in it, and that aliens are more real and more scary than they ever thought possible. The key to the mystery, and to saving the Earth, will lie in something Juno Dawson has picked up on in an old TV episode, and maybe also because The Doctor and Cleo can bond over their gender history.