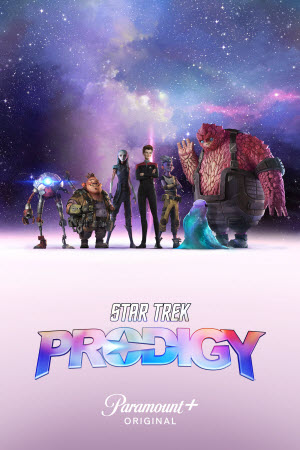 We don’t yet have Paramount + here in the UK, and anyway I’m ambivalent about paying for a streaming service just to watch Star Trek. I can’t think of anything else they offer that I’d want to watch. So I’d kind of resigned myself to not seeing Prodigy. But then I discovered that it is on Nickleodeon, and I have that channel as part of my Sky subscription, so I promptly binged the first season.

Key points: firstly Prodigy is animated. And second it is very much aimed at kids. If you are OK with that, it is a lot of fun.

Far in the depths of space there is a lonely mining planet ruled over by a creepy guy called The Diviner and his robotic henchman, Drednok. The miners are all slaves, and they are of such a variety of species that they can’t even talk amongst themselves to plot rebellion. Nevertheless, some try.

Most notably there is the notorious terrorist known as Zero, whom Drednok has repeatedly failed to capture. Then there is Dal, who is neither a genius nor super-powerful, but is possessed of a boyish enthusiasm, an anti-authoritarian streak a mile wide, and a desperate desire to escape.

After another failed attempt at escape, Dal ends up in the deepest mines along with a young Brikar, a species of alien that owes their morphology to Ben Grimm. Rok-Tahk, it turns out, is an eight-year-old girl with a passion for anything cute and fluffy. How do we find that out? Well, Dal and Rok stumble across a starship hidden deep within the planet. It is still operational, and it has a universal translator system. It belongs to a group of people called The Federation.

Through various adventures, Dal and Rok manage to escape. Along with them they bring the notorious Zero, a troll Tellarite called Jankom Pog, and an amorphous blog of something creature called Murf. They also take along The Diviner’s daughter, Gwyn, as a hostage.

In order to escape the crew needs to work out how to fly this ship, which is called the Protostar. (Hint: never volunteer to fly a ship that is called proto-anything.) They discover that the ship has an on-board AI which manifests as a hologram of a humanoid called Kathryn Janeway. She mistakes our heroes for a bunch of Federation cadets and starts to teach them how to be a proper crew (which occasionally annoys our bunch of teenage runaways no end).

Of course The Diviner is none too pleased to have this great prize stolen from under his nose. He’s not overly happy about losing his daughter either, though that’s very much a secondary issue. Plot ensues, in which we start to learn a few things about the history of The Diviner and the Protostar.

The animated format allows the scriptwriters to do a few fun bits of fan service. That is not dead that cannot be animated. Consequently one episode involves a holodeck training simulation in which Dal gets to meet some famous Starfleet officers, including Mr. Spock and Montgomery Scott. Archive audio of Nimoy and Doohan is used, alongside similar footage of several still-living actors, to provide the voices.

While the crew might be a bunch of foolish, and occasionally annoying, kids, this is very much a Star Trek story, and one which I think will be enjoyed by many fans of the series. If you have access to Nickleodeon, or sign up for Paramount +, do check it out.