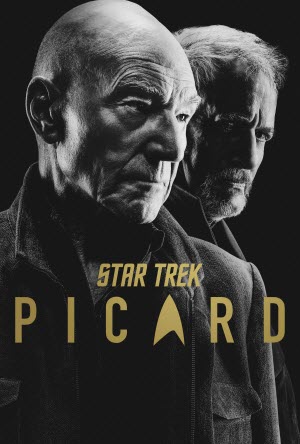 Jean Luc Picard has many, many loyal fans, and Paramount seems determined to milk them for all they are worth. This means re-visiting themes from the original Next Generation series. In the first season of Picard, that meant Data and related artificial beings. In this one it means mainly the Borg, whom we are supposed to have got rid of, and Q, whom sadly we haven’t.

I realise that this is not a commonly held view, but whenever I see anything Star Trek related that involves Q it is usually a signal for me to stop watching immediately. The fact that I sat through all of Picard: Season 2 suggests that I too have a fondness for Jean Luc that is easily exploited.

Having said that, Q is mercifully absent for most of the series. His role is largely to set up the plot, nudge an antagonist into action when one is needed, and then wrap things up at the end. In the meantime, things happen and…

Oh no, time travel! Multiverse! It seems like some sort of virus has infected Hollywood.

So, the Borg re-appear, and are just about to destroy an entire Federation fleet, when Picard and his pals are flung back in time to a world in which Earth has become a Fascist dictatorship. Romulan Legolas gets killed by the bad guys, and the rest of the team get sent further back in time to try to prevent the pivotal event that causes this new history to come into being. It is, you may have noticed, a Legends of Tomorrow plot.

Time travel stories are often an excuse to skimp on production costs by setting the story in the present day, or near as damnit. Here Michael Chabon and the script crew redeem themselves slightly with a sub-plot about a street clinic set up to help illegal immigrants. ICE are major villains for a couple of episodes.

But this series is all about nostalgia, and going back in time means a visit to the original 10 Forward bar where we get to meet a much younger Guinan, which in turn sets up a guest appearance by Whoopi Goldberg in the final episode.

The overriding impression I got from the series was of a deliberate change of course by senior management. The first series set Picard up with a brand new crew, of whom Seven of Nine was the only survivor of previous Trek. The new series sets out to jettison them in various ways. Romulan Legolas gets killed early on, though of course that may mean little as it happens in an alternate reality. Chris Rios gets left in the past (spoiler, sorry, but it becomes obvious very quickly that it will happen) and Agnes Jurati gets a whole new life where she’s not just an insecure genius whom everyone mostly ignores. I hear that in the next season several members of the old Next Gen crew will join the cast. So yeah, the idea of Picard leading a new crew has been abandoned, and nostalgia has become the order of the day.

What else? Brent Spiner gets to have fun playing Adam Soong (again). There is a whole backstory about Picard’s childhood trauma that does sort of have a role in the plot, but is mainly there to allow Patrick Stewart to show off his acting talent. And there is a guest appearance by, of all people, Wesley Crusher, who now works for the Time Variance Authority or some such.

If you sit and think about it for too long, it is all very silly. Thankfully there are some well-scripted episodes along the way, so if you don’t think too hard it is quite enjoyable.

Which should perhaps be all that needs to be said, except I want to stop and think a bit about the Point of Divergence that causes Earth to tip into a Fascist dictatorship. It turns out to be the success or failure of a manned space mission to Europa. I realise that this is Star Trek, and that therefore the entire rationale of the series is heavily bound up with the space programme, with looking outward from Earth, and boldly going. But arguing that without it we will inevitably sink into Fascism? Really? That seems an awfully big claim to be making.