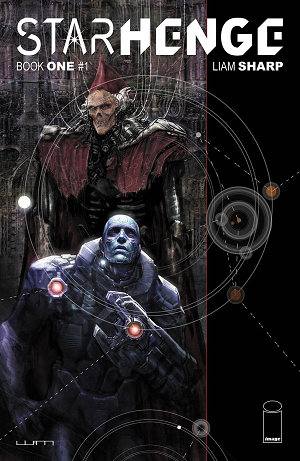 Sometimes in this business you meet someone and can see immediately that they have huge amounts of talent and are going to do very well for themselves. In my case one such person was Liam Sharp. I could see that he had a fine career as an artist in front of him, and I was right. He’s currently having a bumper year. He’s had a hugely successful Kickstarter campaign for an art book, and now he is starting that holy grail of all comics people, a creator-owned title.

Sharp’s art has gone from strength to strength over the past few years. He’s had a hugely successful collaboration with Grant Morrison on Green Lantern. He’s also done a The Brave and the Bold mini-series in which Batman and Wonder Woman team up to solve a murder in Tir Na Nog. He wrote the script for the latter as well as creating some of my favourite images of Diana.

Comics, unlike novels, are very much a team project. If you look at the credits on a standard superhero book, you’ll often see that one person does the pencils, another one inks them, a third adds the colour, someone else writes the script, and a fifth person just does the lettering. That can make doing a creator-owned title a little complicated. But not for Sharp. When he does a creator owned book, he does everything himself. Which is very impressive.

The book in question is called StarHenge, and it is Arthuriana. If you remember my review of Nicola Griffith’s Spear you will remember that it does Arthur on a very small stage. All of the action takes place in a small part of South Wales, and most of the familiar Arthurian saga is wrapped up in the space of a novella. StarHenge is exactly the opposite. It takes place on the biggest stage imaginable.

Meanwhile, in the present day, we meet a teenage girl from Brighton and her Black American boyfriend. Quite what role Amber and Daryn will play in the story is not yet clear. (I’ve only read issue #1 of the comic.) However, it is already clear that the story will take place on an epic scale and with the greatest possible odds at stake. I’m very much looking forward to what Sharp will do with the story. My guess is that it will read well with a heavy rock soundtrack.

In the meantime, you have art to feast your eyes upon. Sharp kindly let me use the image of one of the book’s villains, a Mor-Dreadnaught of The Cast, as the cover of this issue. There’s a lot more of that quality in the book. Issue #1 will be out in July (so yes, I got an ARC), so if you are into comics, or Arthuriana, why not give it a pre-order. Failing all else, how about giving Sharp a nod in the Best Professional Artist Hugo next year, because he absolutely deserves it.