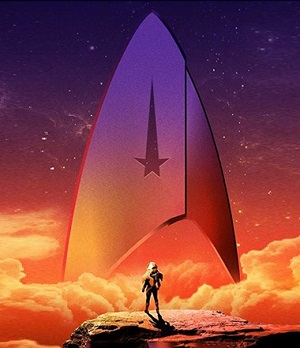 Season 4 of Star Trek: Discovery had a difficult time in the UK. First it was announced as streaming on Netflix. Then it was pulled the day before the first episode was due to drop. We were told we’d have to wait months for it to be available on Paramount +. There was a huge outcry, and mysteriously the series appeared on a live streaming TV platform called Pluto which I’d never heard of before.

I tried, I really did, but I cannot get used to this idea that a TV programme is screened live at a particular time on a particular day and if you miss it, well, bad luck. What do they think this is, the Twentieth Century? Also the early episodes of Season 4 were Not Good, and they were screened late on a Friday when I often had other things to distract me. After a few weeks I missed an episode and gave up.

And then, totally out of the blue, I discovered that the season was available for purchase on Amazon Prime. It didn’t cost a lot, so I went for it.

It gets better, sort of.

The season has an overall arc which is about an existential threat to the galaxy. A mysterious “Anomaly” (aka a rift in the space-time continuum) turns up and starts eating solar systems, starting with Book’s homeworld. So we have an epic piece of fridging that is intended to turn poor Book into a revenge-obsessed vigilante. Michael, it seems, can’t be allowed a relationship with the dishiest man in the galaxy. Something has to turn up to ruin it all.

Anyway, the Federation needs to get a handle on the Anomaly quickly, before it eats any more heavily populated worlds. This results in much handwavium on the part of Stamets & co., and a lot of politicking amongst the Federation and independent worlds. Eventually they track the thing down to an unknown species who live on the edge of the galaxy where no man has, you know. And we then have to decide whether the Anomaly, which is clearly massively superior technology, is a weapon of war, or a superior species accidentally stepping on an ants’ nest.

Along the way various cast character arcs are explored. Stamets and Culber get to be Gay Dads for Adira and Gray, which is charming. Tilly discovers a new vocation as an Academy lecturer, which may be a way off the series for Mary Wiseman. Then again I thought at the end of Season 3 that Saru would be gone now that Michael is Captain of the Discovery, but instead he’s back and having a very awkward love affair with the President of Vulcan. There are attempts to give other members of the Bridge Crew a place in the spotlight, but they are very awkward because those characters don’t have the personality of Chekov or Sulu.

There are good bits too. I liked the side story about the Discovery’s computer system becoming sentient. Jett Reno is brilliant, and has enough personality to make up for an entire Bridge Crew of non-entities. Stacey Abrams got to guest star as the President of Earth. And possibly my favourite bit was Tilly and Admiral Vance sharing a whisky as they waited alone for the Anomaly to destroy Earth. (Spoiler, it does not.)

Eventually we get to the end and discover that someone on the script-writing crew is a huge fan of Arrival and wants to re-create it in Star Trek without all that weird timeline stuff.

In many ways Discovery is better now that the ship and crew has been dumped into the far future rather than trying to ret-con the past. In other ways it is suffering from dodgy plotting. But it is still Star Trek, it still loves science fiction, and it still wants to annoy basement-dwelling dudebros, so I guess I shall keep watching. In any case, I will need Paramount + to watch the next season of Lower Decks, and so I might as well watch Discovery as well.