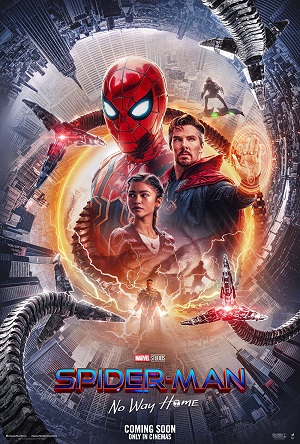 Well that wasn’t as bad as I expected. I’d been all primed to absolutely hate this movie. Into the SpiderVerse is by far my favourite Spiderman movie, and I had heard that No Way Home steals much of the plot of that. To a certain extent it does, and of course it does it badly because all of the spiderpeople it brings in from across the multiverse are Peter Parker, which is very boring in comparison. However, there’s a reason why the new film is the way it is.

Unlike most of the MCU, Spiderman has a long history in the movies. Before Tom Holland there was Tobey Maguire, and before him there was Andrew Garfield. Crucially both sets of previous spidermovies were produced by Sony. An awful lot of backroom negotiating will have been required to bring Spidey into the MCU, and this film may have been part of that.

In the extras for No Way Home there is a lot of talk about it being the final Spiderman movie. I don’t think it will be, though the next one may have a new director and direction. I also expect Tom Holland to turn up in the next batch of Avengers movies, but this film does mark the end of an era, and it does it by looking back at the history of Spiderman movies in a very nostalgic way.

Spoilers Ahead (though not any that you won’t be able to guess from looking at the cast list).

The film begins with the ending of the previous film, in which Peter Parker’s secret identity is made known to the world by a delighted J Jonah Jameson. In desperation, Peter asks Doctor Strange to cast a spell that will cause everyone to forget this vital piece of knowledge, but the spell goes wrong and this leads to a rift in the space-time continuum. Sorry, wrong franchise. A breach in the multiverse, through which various people travel.

The clever bit is that the spell brings through a bunch of major villains, played by the same people who played them in the Sony movies. These are followed by Maguire and Garfield, two older and wiser Parkers, who have to help Tom Holland’s Peter defeat “their” opponents.

Jamie Foxx is good as Electro (and gets a much better costume). Alfred Molina is brilliant as always as Doc Ock. And both cheerfully admit to having been acted off the set by Willem Dafoe as the Green Goblin. Dafoe is right up there with Burgess Meredith’s Penguin as one of the finest super villains ever to grace the screen. He’s genuinely scary.

We have Zendaya as well, and any movie with Zendaya in it is a good movie by definition.

So yes, much better than expected, though still not a patch on Into the SpiderVerse. Apparently Miles is getting a second movie, but it won’t be out until next year because animation of that quality takes a very long time to make.

MCU fans will, of course, be aware that the multiverse is very much a thing right now, and Doctor Strange will be traveling it once more very soon. Also there will be Wanda, and America Chavez. I might actually have to go to a movie theatre.