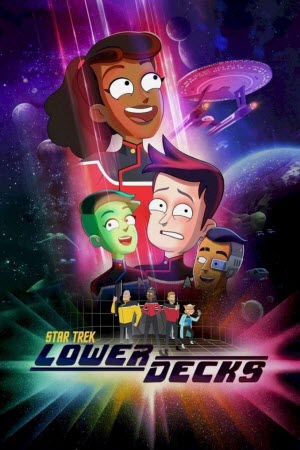 There is a lot of Star Trek on TV right now, and Lower Decks continues to be among the best of it.

I suspect that there were no plans for a second season, because Season 2 starts by necessarily undoing parts of the first season finale. If you’ve seen that you will know that Ensign Boimler managed to get transferred to serve under Captain Ryker on the Titan. Clearly Lower Decks can’t continue without him, so they had to find some way to bring him back. Also Lieutenant Shaxs, the Bajoran Head of Security, died in Season 1. He’s back in Season 2, and everyone just mutters mysteriously about how that always happens with Bridge Officers.

This highlights that fact that, while Lower Decks is clearly made by people who love Star Trek and its history, they don’t take it at all seriously at times. Indeed, half the point of Lower Decks is to poke fun at the weird and silly things about the franchise that fans have come to accept and love. They haven’t had an episode about holographic lungs yet, but they did do an episode featuring Tom Paris, including salamander jokes. If you’ve managed to squirm your way through watching Voyager you will know what I’m talking about.

They are also having lots of fun in other ways. The Tom Paris episode also includes a fabulous section in which Tendi and Mariner have collect an old family heirloom for Dr. T’Ana, the feline ship’s doctor. That had me laugh out loud at the end. There’s also an episode in which the crew of the Doritos Cerritos are sent to guard an endangered species, and save them by explaining to the Ferengi poachers that it would be much more profitable to open a wildlife park.

This does bring us to one of the less savoury aspects of Star Trek, its tendency to include thinly veiled racist jokes. Lower Decks has a particular obsession with the Pakleds, whom I didn’t know much about before. They are a “dumb and ugly but dangerous because slightly smarter than they look” race of aliens who seem very much an exercise in comedy by punching down. I guess that, being a comedy show, Lower Decks was going to make use of them. I’m still waiting for them to do something interesting.

The show also buys into Trek racial stereotyping in an episode that features lower deck crews on Klingon and Vulcan ships. This is much better, and is a hint of things to come because there is actually serious plot happening. It sows some seeds that appear to flower right at the end of the finale when there is a massive shock plot twist. Lower Decks has suddenly got serious, and I’m now very much looking forward to Season 3 to see how the crew of the Cerritos deals with this.