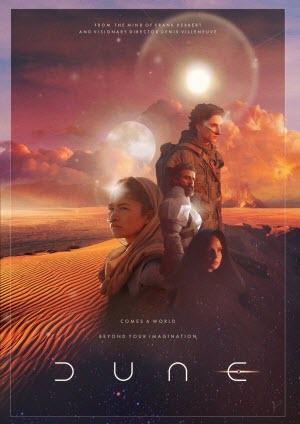 Now that was a movie. I do wish that I had been able to see it on a big screen as it deserves. Maybe someone (hello Glasgow Worldcon) will consider screening both parts back-to-back. Assuming Part Two lives up to the promise of Part One, of course.

So what did I like about it? To start with it is beautifully shot. This is space opera on a massive canvas, and it should be staged and lit to match. There are some sections that are very dark where I struggled to see what was going on, but there were good reasons for them to be dark and I think they would have looked better in a proper movie theatre. I should try watching again with my room blacked out.

Filming Dune has always come up against the problem of fitting a massive book (or trilogy of books) into a movie (or TV mini-series). Denis Villeneuve has gone for a pair of long-ish films which, if the second is of similar length, will total around 300 minutes of viewing time. That’s a fair chunk of the 420 minutes of the John Harrison TV series, and well in excess of the 138 minutes of David Lynch’s gonzo extravaganza. I worry a little that viewers not familiar with the source material will find Part One quite slow, because there is a lot of exposition, but it worked for me.

Casting was largely OK. Oscar Isaac was splendidly regal as Leto. Timothée Chalamet did a reasonable job, handling the awkward transition from gawky teenager to budding megalomaniac quite well. Rebecca Ferguson I thought was a little inconsistent, veering between terrified mother and lethal Bene Gesserit. Jason Momoa and John Brolin both have a whale of a time as Duncan Idaho and Gurney Halleck. Dave Bautista hardly has to act at all as Beast Rabban. And Charlotte Rampling was superb as the Reverend Mother, but then she’s Charlotte Rampling so what did you expect?

And then there was Zendaya as Chani. She doesn’t get much to say, and most of her screen time in Part One is in Paul’s dreams, but she steals every scene that she’s in. She even manages to steal the DVD extras by looking absolutely stunning in her few brief interviews. I don’t know were she got that jacket, but I Want It.

We haven’t seen Feyd-Rautha yet, but there are rumours online that Barry Keoghan has got the part and I think he could be very good.

One thing I found interesting was the brutal utility of the sets and the spacecraft. I get the fact that architecture on Arrakis has to withstand the local climate, but if you compare the spacecraft in Dune to the shiny chrome military aesthetic of Star Wars, or the extravagant beauty of Jupiter Ascending, you get a very different view of a galactic empire. One that is a gargantuan factory oppressing every planet that it touches.

The costumes I felt were one of the weak points. Everything had to be grey and dull to fit in with the overall utilitarian aesthetic. Jessica got a couple of opportunities to stand out as a beacon of colour, and the imperial delegation was interesting, but mostly whatever the crew did to distinguish between the various factions was hard to see because it was so dependent on detail. Also the stillsuits looked way too heavy and intricate for what they needed to do.

The soundtrack, on the other hand, was absolutely worth the two Oscars that it has just won (Best Original Score and Best Sound). There was no opting for popular rock songs, or sweeping John Williams orchestration. Hans Zimmer set out to create a soundscape for the film that was both otherworldy and absolutely evocative of the desert landscape. It is a soundtrack that you feel in your bones, and is constructed in part from the actual sounds of the wind and movement of dunes in a real desert. I wish that the little feature on the soundtrack that comes with the disc had been much longer because I wanted to hear more about how those sounds had been constructed.