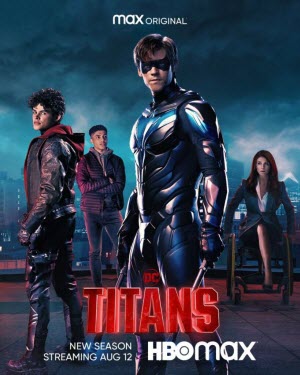 This season of Titans premiered way back in August on HBO, where I could not watch it. However, they finally made it available on Netflix in December and I binged my way through it in rapid time.

Titans is, I think, the DC show that comes closest to doing for their universe what Kevin Feige & co have done for Marvel. It has taken a group of existing characters, found interesting things in their existing storylines, and then done their own thing. It very clearly lives in a very different universe from much of the rest of DC’s output. It is so not part of the Arrowverse, and equally has little to do with what goes on in the movies. The only other show that it appears to have any connection to is Doom Patrol, which is fine by me.

The season starts with Jason Todd, who is a class act as far as being a total fuck-up goes, getting himself killed by The Joker. Bruce does not react well. He goes out and kills The Joker. Then…

Wait, yes, you did hear that right. In episode one they have The Joker kill Robin, and Batman kill The Joker. I am astonished that they got away with that. And maybe one day we’ll find that The Joker isn’t really dead. But Bruce certainly thinks that he’s done the deed, because he promptly retires and flees the country.

Dick Grayson arrives in Gotham to see if there’s anything he can do, and to attend Jason’s funeral, only to find Jason already buried and Bruce vanished. With Batman gone, the city is in danger of slipping into chaos. Barbara Gordon has succeeded her father as Police Commissioner, and for old times sake Dick offers the help of Nightwing and the Titans to keep things from getting out of hand.

Of course they do. Most of the season is set in Gotham, and it is very much a Batman story, revolving around a villain who loves leaving obscure clues to his actions and psychologically manipulating the heroes. I won’t tell you who the villain is, because that would be a spoiler, but he ends up almost destroying Gotham.

Setting the season in Gotham does very much suit the dark and gloomy lighting that the production team prefers. It felt wrong in San Francisco, but it is very, very Gotham.

Naturally the story is mostly about Dick. The rest of the team are visitors to Gotham and are a bit star-struck to be hanging out in Wayne Manor, with the Batcave as a base of operations. The other team members do get some screen time. In particular Cory gets to meet her sister, Blackfire, who is a lot of fun.

We don’t get to see much of Rachel in this series. Donna Troy supposedly died at the end of Season 2, but she is a half-immortal Amazon princess so there was every chance of her coming back. Rachel spends much of the season on Themiscyra trying to make that happen. And it is probably just as well, because once Donna is back she dominates the screen. You can’t have a story that is about Dick when everyone is watching Donna.

I’ve not said much about the plot because it would be too spoilery, but the season did keep me wanting the next episode NOW. There are parts of it that don’t quite make sense, and some of it is very weird, particularly the episode in which Donna is getting herself back into the world of the living. Overall it was good. And it was nice to see Tim Drake being introduced to the cast. I gather that there will be a season 4, though where it will go it anyone’s guess, given how unconnected season 3 was to season 2.

In the meantime I am way behind on Doom Patrol.