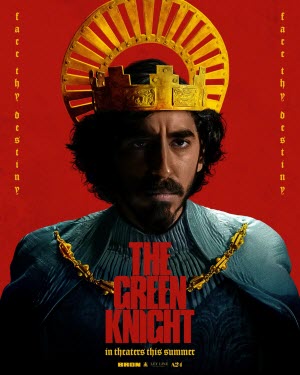 It took me rather longer than expected to get around to watching this film. So long, in fact, that I decided to save it for Solstice because that seemed a very appropriate time for it. Because I did so, I had the opportunity to see other people’s opinions come in on Twitter. I avoided actual reviews, but there seemed to be a lot of disappointment involved, especially in view of the huge amount of anticipation that the film generated. Clearly this was going to be interesting.

I suspect that I went into the film with rather less in the way of expectation, because having seen the trailer I was expecting Art rather than Story. I was right. This is a film which I suspect will very much reward being seen in a cinema rather than merely on a large TV screen as I saw it. Ireland looks absolutely beautiful, and there is a certain amount of poetic appropriateness in the fact that Cahir Castle, which is the setting for Camelot, was also used in John Boorman’s Excalibur.

Somewhat less successful was the choice of Charleville Forest Castle as the location for Bertilak’s castle. It was built is 1798 and is described as being in the Gothic Revival style. Parts of it do look mediaeval, but others definitely do not, particularly the ceilings. The fact that director, David Lowery, elected to show them, rather than avoid them in shots or CGI them out, suggests that he wasn’t that worried (and quite possibly that he had a fairly small budget).

However, as I hinted earlier, I suspect that a good deal of the disappointment with the film comes from the story. Much is left to the viewer to figure out, and if you are not familiar with the original story that might be quite difficult.

To start with, few characters are actually named. Gawain is Gawain, but Arthur and Guinevere are merely the King and Queen. Morgan is merely Gawain’s mother, and the sister of the King, and so on. There is a round table, so it is pretty obvious what is going on, and I’m not sure what was supposed to be gained by the coyness.

Also odd is the choice of the same actor to play both Bertilak’s wife and Gawain’s sex worker lover, but different actors are used to play Bertilak and The Green Knight, who are the same person in the original story. Part of this might be because Bertilak, as portrayed, is older and a little round in the belly, whereas The Green Knight is seriously buff. But I don’t want to cast aspersions on Joel Edgerton’s physique, and there is at least one instance where camera (and maybe audio) tricks are used to imply that Bertilak and The Green Knight are one and the same.

By the way, you might be surprised by the sex worker comment, but apparently the baths scene gives it away. There are people who know what a medieval brothel would look like, and I bow to their expertise. Listen to Eleanor Janega people, for she is smart and amusing. Of course, this does mean that someone involved with the movie also knows what a mediaeval brothel would look like.

Somewhat less odd is the use of Saint Winifred who is a real Welsh saint who does have her head cut off, so her story fits quite well with that of Gawain. The original story mentions that Gawain travels to Holyhead, and Winifred has connections to that part of the world. She died in Conwy, and her shrine is in Holywell, also on the North Wales coast. It was rather strange to see Karli Morgenthau playing the role of an innocent teenage saint, but’s not the film’s fault.

The story of The Green Knight, the film, is clearly still a morality tale in which the headstrong and selfish Gawain learns to become a better person, just as in Sir Gawain and the Green Knight, the poem. However, because so little is explained, viewers might come away confused. What, for example, is Morgan’s motive in all this? It isn’t even clear that Gawain escapes with his head still attached at the end. Some measure of the confusion can be gauged from the fact that Lowery did an interview with Vanity Fair in which he explained what he thought was happening in his film. Even that doesn’t explain the fox. Or the photograph.

Weirdly, the one aspect that Lowery did think needed explaining is the consequences for Gawain if he were to cheat and not face The Green Knight. That’s what the whole flash forward thing is about. But I didn’t need it, and I suspect that most seasoned fantasy readers didn’t need it either.

What we are left with is a beautiful-looking film that does some intriguing things, but also a bunch of ambitious things that don’t quite come off. Which is a shame. But also means that there is room for someone else to do it better. Though I doubt that anyone will ever do it more prettily.