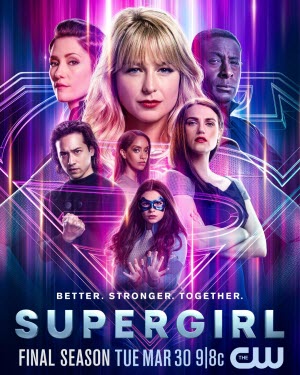 That’s it, then. No more Supergirl to look forward to, apart from possible guest appearances in other Arrowverse shows. I’ll miss this bunch.

This will be a bit spoilerific, so don’t read if you want to watch the series without knowing what happens.

Season 6 was long (20 episodes) and was always planned to be a finale of sorts. There’s no single theme, but Lex Luthor is present for much of it. Along the way, there’s a lot more going on, because everyone needs their story wrapped up.

The rough plot line is as follows. Lex manages to wheedle his way out of a court case, then traps Kara in the Phantom Zone. Several episodes are spent rescuing her. Then she has a few run-ins with the city authorities, before spending the rest of the season fighting Nxylgsptinz (Nxyly), an imp princess from the Fifth Dimension. Lex makes a return for the final few episodes.

There’s not much of a wrap for J’onn J’onzz, but early on we get an opportunity for him to deepen his relationship with M’gann, the White Martian woman. There is promise that they will have long and happy lives together.

Lena, who is only an adopted Luthor, finds out who her real mother is, and finally frees herself from her toxic mother and brother.

Nia starts to gain better control of her dream powers, and she and Brainy get back together again. They are very cute together. In a brief glimpse of the future, we see Nia opening the “Dreamer LGBT Center”.
Alex Danvers and Kelly Olsen get serious about each other and decide to adopt a little girl. Kelly also gets a chance to be more than just a psychologist. This is part of a sequence of episodes focusing on the Black Lives Matter campaign, which obviously the show supports.

The two-part finale had guest appearances by James Olsen, Mon-El and Winn Schott, because you have to get the band back together. There’s also a brief appearance by Calista Flockhart in fine form as always as Cat Grant. (We get a Cat Grant origin story in an earlier episode.)

While the first part of the finale is all about fighting Lex and Nyxly, that gets wrapped up very quickly in the final episode so that we can concentrate on Alex and Kelly’s wedding. Yes, that’s a top-billed superhero TV show that centre’s its finale on an inter-racial lesbian wedding. I gather that the dudebros were furious.

The wedding also gives Melissa Benoist another opportunity to flex her singing talents. Kara and Winn perform the Pat Benatar ballad, “We Belong”, for the happy couple. Benoist doesn’t have Benatar’s vocal power (very few people do), but she does a creditable job.

And then it is time for a wrap for Kara herself. One of the ongoing themes of the series has been her drop in confidence in her place in the world. Being a hero has become harder and harder as she has had to deal with threats that you can’t beat by punching them, and as fighting actual super threats has caused more and more damage to National City. Also the escalating threats have made it harder for her to keep up her job as a reporter.

This is where Cat Grant comes in. She gives Kara a good lecture about needing to be true to herself and stop hiding who she is. Those stupid glasses don’t fool anyone now, do they? Isn’t it time that Kara Danvers came out?

In part, of course, this is a neat break with the silliness of 20th Century superhero stories. The days of the secret identity have been numbered ever since Tony Stark stood up at that press conference and declared, “I am Iron Man!”. But there’s more to it. The Supergirl series has always been about civil rights and opposing far-right politics. Alex and Kelly have been doing their bit for lesbians, and for the African-American community. Nia has done her bit for trans people. Kara, of course, has been resolutely straight and white throughout.

And yet, here in the final episode of the show, we see Kara too accepting that she cannot hide who she is. True happiness can only come through honesty and accepting who you are. That may have costs but pretending to be someone you are not is worse. There’s a limit to what the show can do with such a high-profile character, but they could choose to end by showing that everyone can benefit from a little coming out. I was impressed.

So yes, I will miss these folks. They have been a beacon of sanity and goodness in a world that is going to Hell in a handbasket. It wasn’t just Alex and Kelly who made a family in that season. The entire team made a point of being a family for each other. They are a family for fans too.

Let’s end with a little Pat Benatar, to experience the full glory of that song.