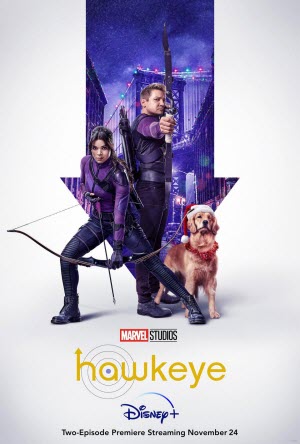 Caveat time first. The TV series, Hawkeye, is based on a 2012 comic run written by Matt Fraction and illustrated by David Aja. The artwork for the credits sequences and publicity has been based very obviously on Aja’s work, but apparently he has not been compensated, or even credited, at all for this by Disney. This is yet another example of Disney stealing work from creative people. Hopefully some creative lawyers will catch up with them sooner rather than later.

As to the show, well it is a lot of fun. Clint Barton is desperately trying to get home to Laura and the kids in time for Christmas, but someone has got hold of his old Ronin suit from during the Blip. The person who originally stole the suit wants Ronin dead, and Clint needs to sort that issue urgently. However, the suit has found its way into the possession of a teenager called Kate Bishop who has idolised Hawkeye since seeing him in the Battle of New York when she was a little girl. Kate has dedicated her life to becoming as good as Hawkeye, because one day Clint will retire and she wants his job.

In line with Marvel’s ambition to produce a wide variety of different shows, Hawkeye is a combination of Christmas Movie and Teenage Comedy. Kate is enthusiastic and talented, and brilliantly played by Hailee Steinfeld. But she has no idea quite how dangerous the life of an Avenger is, or how much it can cost you personally. She also doesn’t know that her hero spent the five years of the Blip as a psychopathic murderer. All of this she will learn though the course of the show.

There’s a lot of comedy involved. That includes a dog who loves pizza, trick arrows, and a group of New York LARPers with whom our heroes get involved. The bad guys are mainly a group of thugs known as the Tracksuits, but smarter predators lurk in the deeper waters of New York’s criminal underworld. I should have seen that coming.

Another interesting feature of the show is a focus on disability. By this time Clint is deaf in one ear, thanks to getting too close to an explosion. He needs a hearing aid. Maya Lopez, the leader of the Tracksuits, is both deaf and has a prosthetic foot. In the comics Maya becomes a hero known as Echo. She has connections to both Daredevil and Moon Knight. Hopefully she will be back.

A sure sign that Marvel doesn’t always take itself too seriously is what is happening on Broadway. The hit show of the Christmas season is Rogers: The Musical, dedicated to the life of Captain America. Clint takes the kids to see it, but can’t take the nonsense, especially the fact that Ant Man has been written into the part about the Battle of New York. There’s a whole dance number based around a song called “I can do this all day”, which we get glimpses of early on, and is present in its full glory in the final titles. The whole thing is very clearly a tribute to New York’s resilience after 9/11 and I expect a whole bunch of academic papers to be written about it.

I suspect that if you know anything about archery you will want to avoid this show like the plague, especially the final episode. But other than that it is very enjoyable.

The bits and pieces of the Young Avengers team are slowly but surely falling into place, and if the rest of the team end up as personable as Kate Bishop we’ve got a treat in store.

However, the star of the show is undoubtedly Florence Pugh as Yelena Belova. I don’t know how Marvel are planning to use her in future, but use her they must because she has stolen the limelight in both productions she has been in thus far.

Oh, and remember, no one in Marvel is dead unless they are really, most sincerely dead. If you didn’t see someone die then they are very obviously not dead.