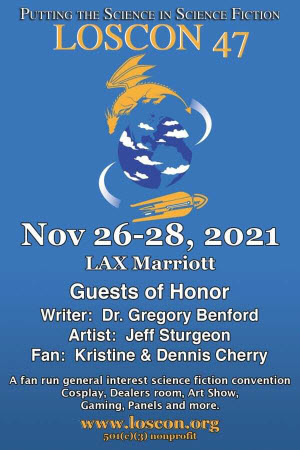 All sorts of experimentation is going on in the world of online conventions these days. The report from World Fantasy talks about how they managed hybrid panels. This year’s LosCon did something similar, but using very different technology.

This won’t be a report on LosCon. I only attended a couple of panels virtually, and most of the convention took place in Meatspace. What I’ll be talking about here is solely the experience of attending a convention in Virtual Reality.

VR, it seems, is going to be a big thing in the not too distant future. Farcebook is clearly betting a lot of money on it, having even re-named the company to emphasise their move into a Metaverse. In comparison, Microsoft’s launch of AltSpace has been very low key, but that is where Loscon chose to hold its virtual programming.

Although AltSpace is doubtless best experienced through a VR headset of some sort, one of the things that makes it attractive is that you don’t actually need one. The whole environment can be experienced in 2D provided that you have a computer with a decent graphics card. If your machine is gaming-capable, you should be fine with AltSpace. As I have one gaming machine, and no headset, that’s how I participated.

The way we experienced LosCon from within AltSpace was in a simulation of the hotel lobby (complete with a pool that we could walk across without getting our feet wet). The Meatspace panel was projected onto a big screen at one end of the lobby. The lobby also contained a big notice board with the program schedule on it, and a few portals, of which more later.

The virtual attendees all had avatars within AltSpace, and it was a bit like being in a Zoom panel except that we could also walk around, and potentially talk to each other. Obviously you ought to keep you mic off while a program item is running. I’m not convinced that everyone did, and I can see the value of some sort of sound bubble feature that people could put themselves into if they wanted to whisper between themselves during the panel. Without that I recommend not standing too close to groups of people, because the sound does taper off with distance, just like in the real world.

Talking of sound, LosCon gave me some idea of what it is like watching hybrid programming that is not well resourced. I’m not blaming them for this. I’m sure they did the best they could with the tech they could afford, but that wasn’t always sufficient, and the virtual con was free to attend.

Rule 1 is that everyone on the panel needs a microphone. There’s also some clever stuff involved in routing the sound from the panel mics through to the virtual environment so that it is broadcast throughout the virtual room. Microphone technique is important. You can’t do that thing where you turn your head to talk to someone else on the Meatspace panel, because the mic will lose you. And there needs to be at least one mic for Meatspace audience questions. Clever tech is also required to make sure that any panellists who are in VR can have their sound broadcast to both the VR room and the Meatspace room.

When you are doing a hybrid panel, with some panellists present in person and some virtually, you need good moderation to make sure that all the panellists get a fair turn at speaking, and that people don’t talk over each other. World Fantasy had that, LosCon didn’t. Resources again.

These are, of course, all solvable problems. They need money for the right tech, people to do the work, and enough time to get everything set up and tested in advance. It is also worth noting that you should still be able to stream the panel to YouTube as well, though the panellists in VR will doubtless appear only as disembodied voices.

Well, to be precise, there was a comic book shop. As I understand it, the way a dealers’ room in AltSpace would work is that you need dealers who have their own stores in the virtual world. They pay the convention to have a connection from the con to their stores. No additional work needs to be done. But of course you are limited to dealers who actually have stores in AltSpace.

There was no art show in AltSpace, though it seems to be that linking to exhibition galleries in an AltSpace version of Kunstmatrix would work well. (See the article on the BristolCon art show for details).

What they had instead, as a present for long-time LosCon regular Larry Niven, was a portal to an AltSpace version of RingWorld that someone has created. It isn’t as big as the “real” thing, but I’m told that it is so big that it would take you an entire day to walk around it in AltSpace.

Is VR the future of online conventions? I think that the tech has a bit of a way to go. Right now it is probably fine for VR afficionados who are happy to put up with the occasional glitches and the somewhat clunky graphics. But the technology is only going to get better from here on, so it is definitely something that conventions should be exploring.