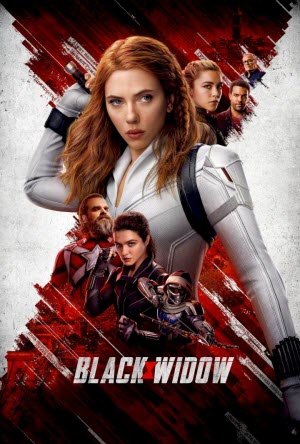 I’ve had this film on disk for some time but haven’t had the time to watch it. Hooray for long distance plane flights. Air Canada had an excellent selection of movies available.

I really can’t understand why it took so long for Natasha Romanoff to get her own movie. Given that Marvel/Disney waited until after the character was canonically dead, and also the huge public row over Scarlet Johansson’s share of the proceeds, I don’t suppose we’ll get another one. Which is a shame because Black Widow was a lot of fun.

One of the things I like about the Marvel Cinematic Universe is their determination to try every other genre of movie rather than simply recycle endless superhero narratives. Black Widow, fittingly, is a spy caper of sorts. It begins with two Russian agents undercover in the USA in the 1990s. It ends with Nat taking down the notorious Russian spymaster, General Dreykov, and liberating his network of female assassins. In between there is much James Bond type action involving helicopters and motorbikes.

Black Widow is also a comedy film featuring a dysfunctional Russian family that was thrown together by their government. The father is Alexei Shostakov, also known as the Red Guardian, a Russian super soldier created as a Cold War rival to Captain America. The mother is Melina Vostokoff, a member of the notorious Black Widow network created by Dreykov. The daughters are two young girls who have been tapped as future Widows. Their names Yelena Belova and Natasha Romanoff.

Years later, Nat has become a key member of the Avengers, while Yelena has remained a Widow. Since Nat’s day, Dreykov has tightened his control over his proteges using a form of mind control. Yelena is liberated while on a mission, and immediately goes undercover. She contacts Nat, but her “sister” is on the run from the US government having taken Cap’s side in the Avengers Civil War. High jinks ensue, including a spectacular rescue of Red Guardian from prison in Siberia.

An example of the creativeness of the MCU team is that the early scenes, and a key element of the plot, were all derived from an off-hand conversation during the Battle of New York in the first Avengers movie in which Nat and Clint Barton reminisce about a mission they were involved in together in Budapest. This turns out to have been Nat’s final test for admission to SHIELD, and also a hit on Dreykov, which we now know failed. Loki is aware of this when he taunts Nat over her murder of Dreykov’s daughter (in the scene on the SHIELD helicarrier). That murder is also a key element in the Black Widow movie.

Something else that the MCU team does well is re-use bits of the comics continuity in new and interesting ways. Red Guardian and Melina Vostokoff are both characters from the comics, but the idea of them posing as a family with the young Nat and Yelena is new. The film also needs a means for Nat, who is on the run, to acquire the high-tech equipment she’ll need. They did that by bringing in the obscure character of Rick Mason (“The Agent”) who is associated with SHIELD but has not been used with Nat in the comics. It is all very impressive.

Nat and Yelena (Florence Pugh) make a fabulous team, and it looks like we will be seeing more of Yelena in future Marvel productions. I hope she gets treated better than Nat did. I was also delighted to see Rachel Weisz in action as Melina. Hollywood is not kind to 50-year-old actresses, and certainly doesn’t see them in action hero roles. And yet here is Weisz in a Widow suit kicking ass alongside her supposed daughters. Glorious.

One other thing that struck me as significant about the film is the Widow network itself. At one point, Dreykov tells Nat that his success has come from his being smart enough to use the one resource that Earth has aplenty, but no one else wants: young girls. The rationale of the Widow network is that Drevkov picked up the most talented girls from all over the world and put them through his training programme. Now the Widows are free of his control, and that has given Marvel a multi-racial cadre of fighting women to rival the Amazons in DC’s Wonder Woman films. They have a somewhat less silly backstory too. Clever.

All in all, Black Widow was a very enjoyable film. I’m pleased that Marvel did finally make it, but I shall miss Nat. Being old, I remember when she and Clint first appeared in The Avengers (the comic), as villains. It has been a long road, and Nat has been very badly used along the way.