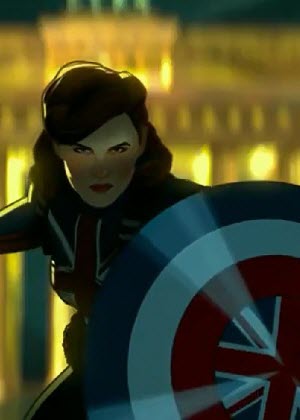 Well, the MCU had to mess up at some point, and I guess it is better that they did so in a cartoon series than in a live action movie. Having said that, it rather suggests that less care and attention was paid to What If? Because it is only a cartoon.

The core idea of the series is that in the multiverse many different versions of the MCU exist, in which the characters we know and love can have very different lives. The Watcher, because he exists across all universes, sees all, and can bring us some of these stories.

So far so good. This gives the opportunity to do a bit of fan service, such as a story in which Peggy Carter becomes the Super Soldier (but not Captain Britain, obviously, because that title is taken). There’s also one in which the young T’Challa is abducted by the Ravagers and becomes Star Lord. It was great to get to hear Chad Boseman again, but that story is exceptionally silly in that it portrays T’Challa as so irresistibly good that he converts Thanos to his side.

In fact, most of the stories are pretty silly. Many of them also go for the soft option of killing off the heroes because they aren’t the heroes of Our Universe so their deaths don’t matter. Humbug.

Talking of Boseman, many of the characters are voiced by the people who play them in the live action shows. It is notable that those who are not are characters whose actors seem to have opted out of the MCU: Black Widow, Iron Man, Cap. Quite why Natalie Portman agreed to come back given what they did the Jane Foster is a bit of a mystery, but at least that episode was funny.

The Watcher is voiced by Jeffrey Wright, and is notable for being the first example of utterly disastrous casting in the MCU project.

The one saving grace of the series is episode #4 featuring a version of Doctor Strange who becomes obsessed with seeking power so that he can save the life of Christine Palmer. This is the only episode with a decent script. This may be significant because we know that the next Doctor Strange movie will be titled, The Multiverse of Madness. So it is likely that the vision of the multiverse presented here will have some connection to the one in the movie. There may have been hints dropped. And the MCU management may have paid more attention to this episode than the others.

Ah well, roll on the Hawkeye TV series, which promises to be rather good.