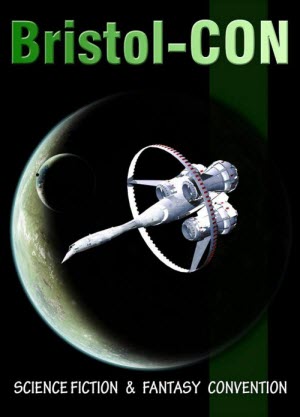 BristolCon has just happened. That it did is something of a minor miracle because COVID is raging out of control here on Plague Island. However, most of us are now double-vaccinated. A reasonable proportion of us are aware that the virus is airborne, and that precautions can be taken. Many of us are just fed up of the isolation.

So, wise or not, there has been a convention. The ConCom did take precautions. The number of attendees was severely limited compared to previous years. It was possible to keep your distance. Some of the programme was also streamed live, which was nice. I know that we had at least one person in France following along. The ConCom are learning to do conventions in a hybrid way, which is good, because it means that BristolCon can be shared with the wider world.

I didn’t see much of the con, partially because I had a dealer table, and partially because I am isolating as much as I can. I have a trip to Canada planned for next Wednesday and I do not want to fail my fit-to-fly test. Dealer rooms are BristolCon are always a bit quiet because the programming is good, but people do come in during the breaks and I sold almost as much here as I did in the two days (including a book launch) of FantasyCon. I am very pleased.

I also did two panels. One was about ret-conning, which turned out to be a very serious discussion about how we deal with the work of creators whom we have come to view with distaste. The other was about democracy in epic fantasy. I think both went very well.

What I liked most about this BristolCon is that it felt like a proper convention. FantasyCon felt weird. Not only was it much smaller than a typical FantasyCon, but many of the people there didn’t seem to be usual attendees. They certainly were not book buyers. This BristolCon was smaller than it has been in recent years, but much bigger than it was when it started. And the people there were very definitely book readers and buyers. Maybe nature is healing after all.